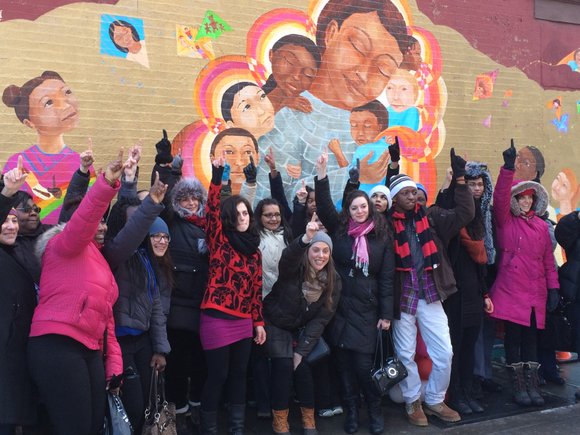 Participants in the One Billion Rising for Justice flash mob in East Harlem to draw attention to issues of violence against women. Photo by Malorie Marshall

Approximately 30 people are waved their arms back and forth while NYPD Community Affairs officers watch from across the street. People passing by occasionally stop and watch. One woman stops and asks what’s going on.

The ruckus was a flash mob, off East 118th Street and 1st Avenue.

On a chilly Valentine’s Day afternoon in East Harlem, employees of the program STEPS to End Family Violence, students and other members of the community were out to participate in the “Break the Chain” flash mob. The event was one of over 20 scheduled in New York City and one of thousands scheduled across the globe in honor of One Billion Rising for Justice, a campaign determined to bring awareness to issues of violence against women.

“We’re here for anyone who has experienced violence and trauma,” Jesenia Santana, flash mob organizer and STEPS policy advisor said to the small crowd.

One Billion Rising is a campaign offshoot of the non-profit organization V-Day, formed on Valentine’s Day 1998 by Eve Ensler, author of “The Vagina Monologues.” The campaign takes its name from the United Nations statistic that one billion--or one-in-three--women will be beaten or raped in their lifetime.

Organizers of One Billion events didn’t have to adhere to any stringent guidelines, as long events were scheduled for Valentine’s Day.

Rusti Miller-Hill shows off her shirt in honor of the Valentine's Day flash mob in East Harlem.

“We do the work because we need to bring voice to what’s happening,” Rusti Miller-Hill, a STEPS employee and longtime resident of Harlem, said. “What we’re doing is recognizing so that we can break the cycle; so my daughter and my granddaughter doesn’t have to grow up in a world where abuse is something that should be normally accepted.”

The flash mob event began with a welcome from event organizer Santana, a slam poetry session with students from local schools and then culminated with a couple run throughs of the “Break the Chain” dance. Dance is often chosen for these events because it’s an easy way to bring attention to a subject that can often be hard to address.

In addition to the flash mob, attendees also asked passersby to sign a form in support of the Domestic Violence Survivors Justice Act, a bill that seeks to alter sentencing for victims of domestic violence who are incarcerated for crimes directly related to their abuse.

“And so we have a concrete action step, which is work on the legislation.”