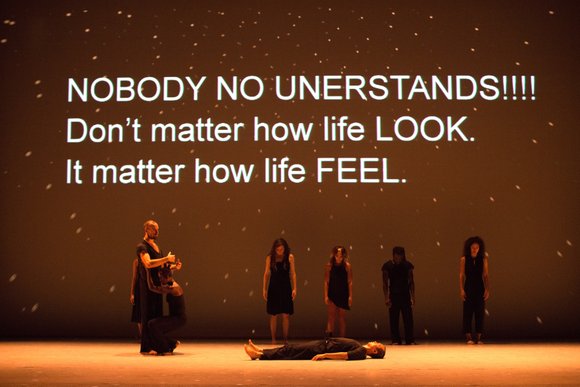 From the start, the 10-member cast in David Rousseve’s “Stardust” is breathtaking.

Breathlessly still, they fill the stage, gazing at the audience until finally they move as one (a knee buckles, an elbow rights their bodies back to standing or soft double-breaths trigger more impulse movement) while the screen behind them delivers text-speak. One dancer, Taisha Paggett, facing the screen, makes markings in the air as if she is writing the text. One text reads: “Dear secretconfessions.com, I writes my biggest secret just for you. Please read, K?”

Another follows: “I want a BFF sooooooo bad!!!!!!! Somebody who understand how I feels an give me love.”

We soon learn that the words are from Junior, the invisible protagonist who is desperately trying to find someone to hold his hand and give him love. The dancer’s slow-moving, joint-driven meditation would return here and there, punctuating the work.

“Stardust” is emotionally draining yet powerfully captivating, and as such, it takes the audience on a bumpy ride from acknowledgement, with Junior accepting that he is gay; to the humorous, with a fierce voguing duet that drew howls from the audience; to the sublime, as Kevin Williamson holds his arms in what seems like a never-ending embrace, as one-by-one the other nine dancers try to fit into his arms but inevitably slip onto the floor on their backs, crawling away on their elbows but returning to his embrace again and again.

One hour into the story, Rousseve appears—sadly, for only two and a half minutes—with a gesture-driven solo, one hand to chest, the other reaching high, matched with pleading gasps and rippling joints, cementing the bittersweet story. The takeaway is rough. Junior pleads for help to find love because as a young, African-American gay boy, he is marginalized, and conversations through technology become his only respite.

Rousseve admits that this was not an autobiography, nor is it meant to offer any political or religious position, but the work is peppered with the reality that surrounds these thoughts. The young Junior, for example, ends up in foster care because he has no family and is molested. He speaks using only Ebonics because that is what he knows, and one of his sole confidantes is his dead grandfather, who communicates with him through Skype. This, Rousseve wanted us to know, is the real deal.

Toward the end, Junior writes, “Dear God: I like 2 ask you questions even if you no answers.