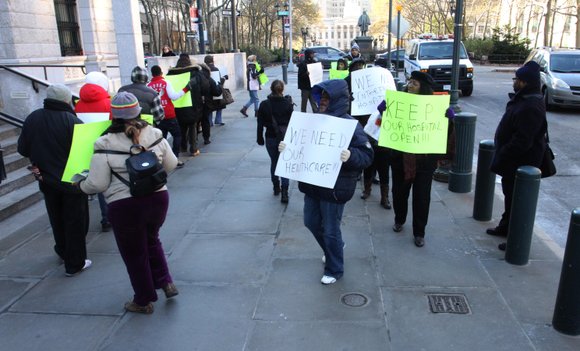 Will Washington end up saving New York’s struggling hospitals? Many workers and patients hope so after the recent news.

On Friday, the New York state government and the federal government agreed in principle to the Empire State receiving $8 billion in federal funding over the next five years to help bolster struggling facilities like Interfaith Medical Center and Long Island College Hospital (LICH).

While Albany didn’t get the $10 billion it really wanted, and details of the current deal are still being worked on, New York Gov. Andrew Cuomo expressed his satisfaction with the latest development.

“While the state will be reviewing the terms and conditions of this agreement, it is clearly the biggest step forward toward a positive conclusion for our communities, particularly in Brooklyn, that have suffered from diminishing health care services,” said Cuomo in a statement. “Securing this waiver will address those needs, allowing us to increase access and improve the quality of care for New Yorkers while making New York’s health care system a model for the entire nation.”

According to Cuomo, the state’s on track to save taxpayers $17 billion through reduced spending and program reforms, with one of the governor’s main priorities involving reducing the cost of running medical facilities in the state. No matter the plan, anything that saves hospitals and keeps them afloat is good news to New York State Nurses Association (NYSNA) Executive Director Jill Furillo, RN.

“These federal funds will help to protect health care in underserved communities,” said Furillo in an email statement. “Too many patients already lack access to quality care. NYSNA nurses, patients, caregivers and elected leaders are united to stop the epidemic of hospital cuts and closures.”

New York City Mayor Bill de Blasio praised the latest news as well. Having had fought for the preservation of both Interfaith and LICH as public advocate, de Blasio called the news “long overdue.”

“For neighborhoods at risk of losing their access to health care, the waiver will help stabilize and transform struggling institutions,” said de Blasio in a statement. “With this funding, we can finally turn the page on a decade of reckless hospital closures and confront the immediate crises facing seven hospitals in Brooklyn alone. This is our opportunity to focus on long-term solutions that deepen access to preventative, primary and emergency care.”

Back in January, the AmNews reported on a U.S. Bankruptcy Court-approved $7.5 million in state and Vital Access Provider funds to keep the hospital operating until mid-February. In a statement, Brooklyn Borough President Eric Adams said that the new money is the first step in preserving the facility.

“This is a crucial step that my local elected colleagues and I have been urging for to take Brooklyn hospitals off life support and give them needed aid,” said Adams. “Resources like these will help advance the essential work of improving health care in our borough, an effort which must include patients, physicians, providers and political leaders alike in partnership.”