Malcolm X: The price of freedom is death 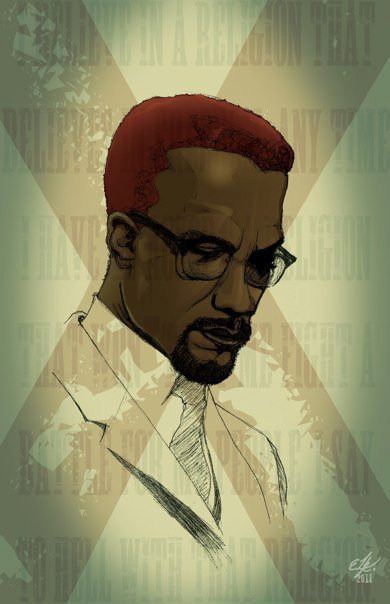 “Anytime you beg another man to set you free, you’ll never be free! Freedom is something that you have to do for yourself … and until the American [Black man] lets [Caucasians] know that we are really ready and willing to pay the price that is necessary for freedom, our people will always be walking around here as second-class citizens, or what you call 20th-century slaves … the price of freedom is death!” said Malcolm X during a 1964 interview.

Admirers contend that in the five decades since that frigid Sunday afternoon, he has become a martyr whose life has been closely scrutinized as his legacy continues to influence the culture, economics, education, politics and socialization of Africans throughout the Diaspora.

Fifty years ago, Malcolm X was on hiatus from the Nation of Islam (NOI), having been silenced for 90 days, allegedly for disobeying its leader, Elijah Muhammad, and his specific orders not to publicly comment about President John F. Kennedy’s assassination on Nov. 22, 1963. “The chickens came home to roost,” Malcolm told a reporter, earning the suspension.

In the first couple months of 1964, Malcolm X was in a Miami, Fla., training camp with top contender Cassius Marcellus Clay, who was preparing to challenge the intimidating Sonny Liston for the World Heavyweight Championship on Feb. 25, 1964. The two had known each other for approximately three years. After the 7-1 underdog “shocked the world,” stopping Liston at the conclusion of the sixth round, Clay announced that he had become a Muslim and was changing his name to Cassius X. Malcolm eventually bestowed the attribute “Muhammad Ali” upon him.

“As a follower of the honorable Elijah Muhammad, in the religion of Islam, it had everything to do with his victory,” said Malcolm, responding to a reporter’s question regarding the boxer’s religious affiliation. “It gave him the confidence that was necessary to be the winner.”

Malcolm never rejoined NOI after the suspension period elapsed, though Ali stayed with the organization.

“I remain a Muslim, but the main emphasis of the new movement will be Black Nationalism as a political concept and form of social action against the oppressors,” Malcolm maintained during a March 8, 1964, press conference announcing his independence. “I have reached the conclusion that I can best spread Mr. Muhammad’s message by staying out of the NOI and continuing to work on my own among America’s 22 million non-Muslim [Blacks].

“I am prepared to cooperate in local civil rights actions in the South and elsewhere, and shall do so because every campaign for specific objectives can only heighten the political consciousness of [Blacks] and intensify their identification against white society.”

By the end of March, Malcolm X and Dr. Martin Luther King Jr. met briefly for the first and only time.

“[Blacks] still don’t understand the power of the ballot in the North. We must make them understand that the [Black] voters have it in their power to decide next November whether Johnson stays in the White House or goes back to his Texas cotton patch,” said Malcolm.

A number of events this weekend in New York City will commemorate his legacy, including on Friday at the Malcolm X and Dr. Betty Shabazz Center, 3940 Broadway (theshabazzcenter.net, 212-568-1341), and on Sunday at 3 p.m. at Clarke House, 286 Convent Ave. In addition, the annual pilgrimage to Shabazz’s gravesite in Ferncliff Cemetery departs from 125th Street and Seventh Avenue on May 19 at 10 a.m.