Barron: 'Cuomo is disenfranchising a million Black and Latino voters' 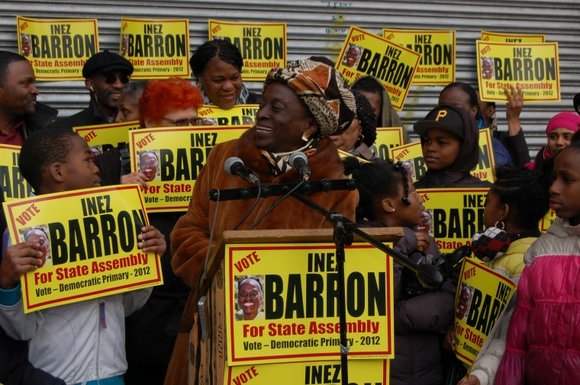 “Gov. Andrew Cuomo has no regard for Black or Latino people,” charged Council Member Inez Barron, as she held a press conference on the steps of City Hall to highlight a City Council resolution demanding that the governor call for special elections to fill 11 legislative vacancies in the state Assembly and Senate, including her past Assembly seat, which she left when she ran and won the City Council seat of her husband, Charles Barron.

“As far as I am concerned, this is an issue of disenfranchising Black and Latino people, and it is being perpetrated by the governor, because he alone is the one who can call for a special election. If he doesn't call for anything prior to June, there will be no representation for a million people for a whole 12 months,” said Inez Barron.

The governor did not want to respond to Inez Barron's charge. Instead, a spokesperson referred the Amsterdam News back to a statement that the governor gave a couple of weeks ago on Susan Arbetter's radio show. when Arbetter asked, “Are you going to call special elections for the 11 open seats?” Cuomo responded, “We are looking at that now. You know, it seems like every week there is another open seat given the travails of our friends in the Legislature. If you have to do special elections, they are very expensive to do because you basically have to run a separate election operation. So it is obviously something you don't want to do lightly. I would like to know what the legal effects are, and I would like to know, on a practical level, how many more shoes are going to drop here and how many people are going to be leaving office.”

“In December, he said there were no vacancies. When the seats opened up in January, he said he had to weigh the financial costs, and he has not made any pronouncements since then, so I introduced a resolution which calls on the governor to call special elections for all areas—nine in the Assembly, two in the Senate, six of which are in downstate New York City—representing 700,000 people. East New York, part of Canarsie, part of the Bronx and part of Crown Heights—all Black and Latino areas.

“There is no dollar amount on Black and Latino people being able to have representation. The Black, Latino and Asian Caucus here in the City Council are unanimously support the resolution, and Congresswoman Yvette Clarke has composed a letter, and it has been signed off on by Assembly Member Karim Camara and several others. We had a hearing today, and [attorney] Joan Gibbs came and gave testimony on behalf of the Center of Law and Social Justice; others talked about the effect of not having representation.”

Inez Barron said that people in her district are upset that they have no voice in Albany, because “in addition to not having representation during the budget process, during the legislation negotiation when everything is set, we don't have people working in our district offices.”

Noting the opposition to special elections, Inez Barron stated, “Someone said that good government groups are opposed to the special election because it favors the machine, who gives the party line to the person of their choosing. Well, that may be, but there has been legislation for two years or more to change it, so they can put the pressure on the legislators to change it.”

Perhaps there is another issue. Charles Barron, the oftentimes controversial activist politician, served three terms as the East New York councilman, and his seat was won last November by his wife, Inez. A special election is needed to fill her seat, and opponents decry the fact that Charles would be a shoe-in for the Democratic nomination.

“I didn't know you were that powerful,” one upstate lawmaker told Charles Barron last month. “Word is Cuomo doesn't want you upstate in the Legislature, so he is stalling on all of the elections.”=

Asked to comment on reports that Cuomo is holding back because her husband would be running for her now vacated Assembly seat, Inez Barron simply laughed and said, “I know he knows Charles' voice. He knows his position, he knows his strength and he knows that he will be confronted by Charles Barron on any of the issues that do not speak to justice for us.”

While Cuomo cites cost as one reason for not holding special elections, Inez Barron says that during this crucial budget season, it is undemocratic not to have upstate representation for the Black and Latino communities.

Barron and her colleagues determined that almost a million Black and Latino constituents were not getting representation while Cuomo procrastinated, not calling for what should be automatic elections. While the governor is umming and aahing, hundreds of thousands of mostly Black and Latino residents have no representation and are not getting services at their local district offices to address pertinent issues concerning them, especially during current budget and legislative negotiations. “This comes down to the basic issue of taxation with no representation,” Inez Barron told the AmNews.

“While our communities are facing drastic cuts to health care, while the state government has not abided by the financial settlements due to the New York City regarding the Campaign for Fiscal Equity … while Black and Latino children are denied their fair share of state funds, Gov. Cuomo has decided to impose taxes on 11 communities, without the benefit of representation,” she said.

Cuomo has withheld the reasons why he refuses to call elections for the 11 vacant districts. Barron proclaimed, “He is not saying anything. And even if he says we will wait until June, the session is over and our people would have no involvement in issues such as hospitals. There are some critical issues regarding Brooklyn hospitals, and they won't have a voice in that, plus all the different social programs. We are the neediest community. Over New York state, a million people are impacted. It’s far beyond what people are doing in any one district. Many people across the state are being disenfranchised.”

According to Inez Barron, homeowners with an array of issues are coming to her City Council office to ask advice.

“Our communities are entitled to be at the table, to participate in the process of forming a budget, making allocations, funding groups and funding organizations that participate in delivering services,” she said.

Inez Barron is not the only elected official to have vacated her seat; there are five others, including new Brooklyn Borough President and former Sen. Eric Adams, recently convicted former Assemblyman Eric Stevenson and new City Council Members Vanessa Gibson, Alan Maisel and Rafael Espinal.

“[Cuomo] doesn't care about Black people,” Inez Barron continued. “He has been disrespectful of the Black Caucus.

“We are looking forward to the Caucus Weekend because thousands of people will be there and make this a statewide issue.”