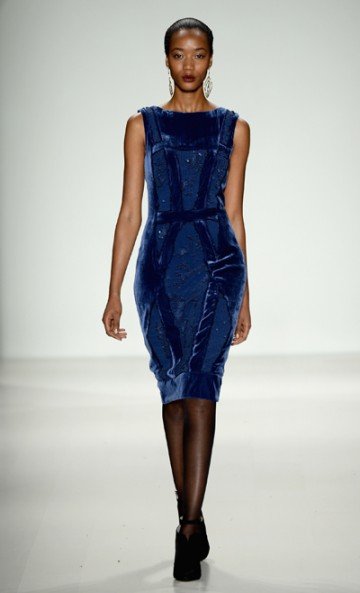 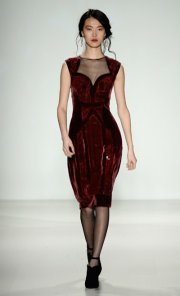 At Tadashi Shoji’s fall show, the audience was lost in an evening reverie, wandering through a Moorish palace. The expansive backdrop, reminiscent of tapestries decorating palace walls, was filled with tales of enchantment. Ornate architectural details, luxuriant textiles and palatial soundscapes were intimately linked to the mystery and romance of yesteryear. Shoji’s collection was an elegant balance between antiquity and modernity. The line was designed for a modern woman with royal taste.

In the collection, the designer’s effortless silhouettes were paired with exclusive textures of laser-cut microsuede, velvet cuts and shimmering accents. Shoji’s dimensional crewel embroidery and corded embroidery on tulle are influenced by motifs that are usually found in Moorish architecture.

Colors were bright and saturated, lending themselves to the colorful royal blue and white glazes of intricate tile work. The clothes were so beautifully designed in rich patterns that some of his evening pieces were shimmering like stars in the black of night. As the gowns glittered, especially during the finale, you could imagine a compass marking a glittering roadmap to the desert sky. 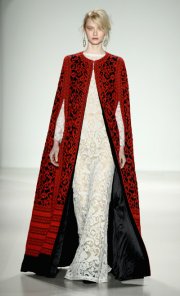 Some Fashion Week shows take you on long trips, especially if the atmosphere, sound, lights and clothes are well coordinated. Shoji’s styles inspire women who are enticed by mystery and romance, reminiscent of an enchanting Moorish night.

Born in Sendai, Japan, Shoji began drawing and painting at a young age. He now resides in Pasadena, Calif. He earned his degree in fashion design at the Los Angeles Trade Technical College and worked at prominent clothing manufacturers, including Richard Blackwell. In the beginning of his career, he was troubled by the fact that women had few options for special occasion dresses in the contemporary market. Shoji identified a niche and set out on his own.

He has presented a runway collection each season in New York since 2007. This designer has been the official designer of the Tournament of Roses Royal Court for over 10 years. He just signed a licensing deal to launch a Tadashi Shoji fragrance in fall 2014.