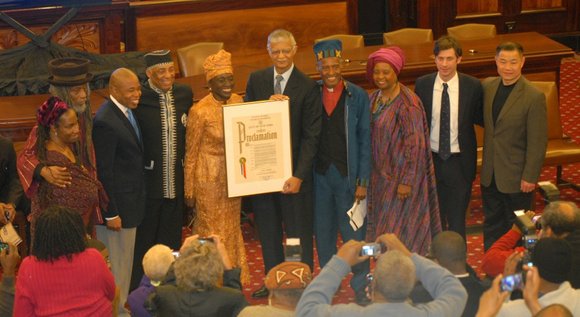 I spent the entire month of January in Detroit working on a book. Since 1985, I have lived in Harlem, though I am a native of Motown. It was one of the coldest winters I have ever known, and it was made all the more colder when I walked over to the riverfront where the riverboat Princess was docked.

Earlier in the week, I learned that Chokwe Lumumba was going to be honored by the National Lawyers Guild, and I saw this as an opportunity to see him, because I missed him the last time he visited New York City. It’s not easy to get to the riverfront unless you drive, take a taxi or know about the transit buses I saw dropping folks off as I trampled through the snow past the Veterans’ Memorial Building. Why they chose the Princess to salute Lumumba was baffling given the terrible weather and the inaccessible location.

I was among the first to arrive and the first to learn that Lumumba would not be attending. One of the event’s coordinators told me that he had called earlier that day and said he was ill and wouldn’t be able to attend. He gave me a program, and I began the long trek back to the hotel.

The next morning, I tried to reach Lumumba to check on his condition but was unable to get through and I hoped he was OK. That was back in January.

On Tuesday evening, I came home to learn that Lumumba was dead. I wondered if his death was related to the sickness. Calls from my friends in Detroit, particularly from one of my ex-students who was close to Lumumba when he was a student at Wayne State University’s Law School, filled me in on the details. He had died of a heart attack at St. Dominic Hospital in Jackson, Miss.

Soon, his obit was all over the Internet because of his prominence as the mayor of Jackson. He was 66.

I first met Lumumba, who was born in Detroit and attended St. Theresa High School, when he was an activist at Western Michigan University. He would often come to Wayne State, where I was teaching, to meet with other activists on campus. The late radical attorney Kenny Cockrel was his idol, and that may have been one of his reasons for later setting his goals on a law career.

During our rallies on campus—which seemed to happen almost daily—he was often among the speakers, and I am not sure if he was at the founding meeting of the Republic of New Afrika that occurred on campus, but later he became a most energetic member, so much so that within a couple of years, he was among the group’s leadership.

He was a tall, strikingly handsome young man with a keen political sense, and when dressed in his customary dashiki, he moved across campus like an African warrior, ready to fight for a number of local, national and international causes, which he found time to do despite a heavy and embattled stint at the law school.

By then he had changed his name from Edwin Taliferro to Chokwe Lumumba. Chokwe, he told us, was for the people in Africa who valiantly resisted the advances of European domination, and Lumumba for the fallen hero of the Congo, Patrice Lumumba. His life from that point forward would embody the spirit of his namesakes.

Fast-forward to the 1980s and 1990s. I would occasionally hear about him and his fascinatingly productive legal career that was gradually morphing into a political one with aspirations for elected office. In 2011, when he led the protest to get the Scott sisters out of prison—they had served 16 years for a crime they didn’t commit—it was the same old Lumumba I knew back in the day when he was on the frontline for a number of cases in Detroit concerning activists, as well as representing members of the RNA and their battles against state repression, especially in Mississippi. The Scott sisters were released by Gov. Haley Barbour.

When I learned of his mayoral bid two years ago, I immediately joined the wave of enthusiasm he commanded, and I was overjoyed by his victory last July.

I remember one day in the 1970s, he came by my office at Wayne State and we talked about Pan-Africanism, the RNA, Brother Gaidi (Milton Henry), Brother Imari Obadele (Richard Henry) and Kwadwo Akpan (Gerald Simmons)—who were alive then but are now all deceased. He was fully committed to the dream of carving out a nation in the country’s Black belt.

He got a little bit of the land he sought as mayor of Jackson, and we can only guess how much more he would have achieved given a few more wonderfully productive years.