Greetings! With the new year beginning, we wish a “Happy New You” to everyone as we all pursue our dreams and manifest our inner visions for 2014.

The Kwanzaa and Christmas season took an unexpected turn with the sudden death of legendary Pan-African cultural activist Brother John Watusi Branch, founder of the African Poetry Theatre in Jamaica, Queens. Our condolences go out to the Watusi family and supporters. Condolences to fellow Buffalonian the sultry “Sheila” of WBLS-FM, who lost her mom as we ended the year.

Condolences to all who lost loved ones or family in 2013.

Ishmael Reed’s “The Final Version,” which sheds light on the African-American community and communism, is now playing at the Nuyorican Poets Cafe, 236 E. Third St. It’s directed by and starring Rome Neal, with an awesome cast. Call 212-780-9386 or visit nuyorican.org org.

“Motown: The Musical,” with book by Berry Gordy Jr. and featuring Felicia Boswell as Diana Ross, Tony nominee Charl Brown as Smokey Robinson and Brandon Dixon as Berry Gordy, is now playing at the Lunt-Fontanne Theatre, 205 W. 46th St. (between Eighth Avenue and Broadway). For tickets, visit ticketmaster.com or motownthemusical.com. 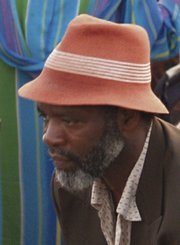 Live Nation is pleased to present Motown’s iconic Grammy winners, the Temptations and the Four Tops, in a special night of music at the NYCB Theatre at Westbury on Saturday, Jan. 18 at 8 p.m. Tickets are on sale by phone at 800-745-3000, at the Westbury box office or online at www.ticketmaster.com.

The Big Apple Circus welcomes you to its all-new show, “Luminosity” playing now through Jan. 12 at Lincoln Center! Visit bigapplecircus.org.