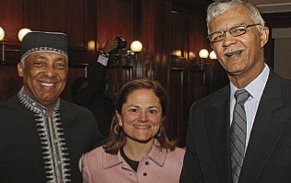 In what has been called “the most transparent” election in City Council history, East Harlem Democratic Councilwoman Melissa Mark-Viverito became the city’s first Latina and woman of color to be named speaker of the City Council.

In front of family, friends and colleagues and broadcast to millions of New Yorkers, Mark-Viverito accepted the nomination and vote for the coveted position responsible for obtaining a consensus on major issues. The speaker is also the representative for the position of minority leader.

The vote was unanimous and predictable leading up to the election among council members. Mark-Viverito was so confident about her election she even released thank-you letters confirming her election in December.

Receiving the necessary 30 votes out of the 51-member council, Mark-Viverito beat Democrat Dan Garodnick, who conceded just before the nomination.

Mark-Viverito’s early announcement of her win in December caused a bit of controversy. Shortly after city elections, she released statements from the 30 council members supporting her and declaring victory. Garodnick immediately released a statement saying that the victory was not official, reminding her that he was in the race.

However, on Wednesday, he offered words of congratulations to his colleague, vowing compromise.

“I look forward to working with Speaker Mark-Viverito and to helping her to ensure that we can deliver a sound and responsible government for all New Yorkers.”

In her acceptance speech, Mark-Viverito thanked her fellow council members, pledging to work on major issues that are affecting the city, including affordable housing, education and crime.

Mark-Viverito added that her colleagues “all have a friend and an ally in the Speakers office, and my door will always be open.” She said her leadership style allows all voices to be at the table and this collaborative spirit puts the will of the members and the needs of their constituents before the ambitions of a speaker.

“On behalf of One Brooklyn, I would like to congratulate our new Council Speaker Melissa Mark-Viverito on her election as the first Latina citywide-elected official in New York City’s history,” said Brooklyn Borough President Eric Adams. “She has a record of experience as a progressive activist and legislator that we can all be proud of, working on issues near and dear to Brooklynites like affordable housing, fair wages and civil rights.”

“Melissa Mark-Viverito has demonstrated exemplary character, leadership and drive during her time as an elected official and will use these traits to take the council to new heights in developing a more inclusive city for our most vulnerable citizens,” he said.

Bronx Borough President Ruben Diaz Jr. said, “I know that Speaker Mark-Viverito will make our city proud, and I look forward to working closely with her and our borough’s City Council delegation on moving forward our shared vision for the ‘New Bronx.’”