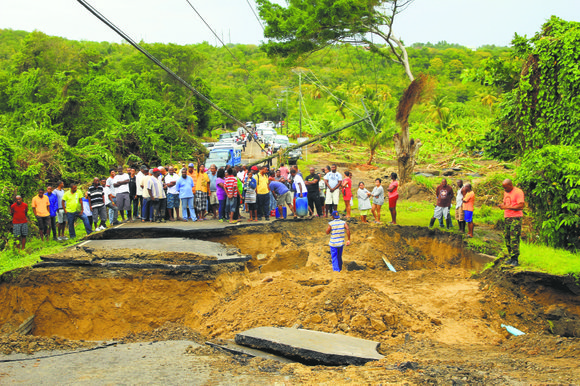 These images were taken Dec. 24- Dec. 26. The storm, which came without warning, began on the morning of Dec. 24 and ended about 9:30 p.m. Solwazi Afi Olusola

There is still significant road and land damage.

The United Nations General Assembly has finally declared the establishment of an “International Decade for People of African Descent” (IDPAD).

The General Assembly resolution came through in December of 2013. The newly created IDPAD will take place from Jan. 1, 2015, through Dec. 31, 2024, and will include celebrations throughout the world.

Some two years in the making, IDPAD has been a long time coming. In late 2009, the General Assembly had designated the year 2011 as the “International Year for People of African Descent” (IYPAD). However, even IYPAD had itself taken some time to be established. IYPAD was created in response to the findings at the World Conference against Racism, Racial Discrimination, Xenophobia and Related Intolerance (WCAR), which had taken place 10 years before in Durban, South Africa.

Findings at the WCAR led to the Durban Declaration and Program of Action (DDPA), a document that looks at the historical reasons behind discrimination against people of African descent and proposes solutions that are designed to be “the international community’s blueprint for action to fight racism.” But the DDPA’s solutions were implemented sparingly. Throughout the years, various nations would intermittently issue declarations or pass new civil rights laws, but there was never really a major push for an international effort to fight racism, particularly as it continues to affect people of African descent.

Currently, the whole island still does not have running water.

Now, with the IDPAD, there should be a concerted effort by the U.N. to push the international community to design major anti-racism legislation and to ensure that citizens of African descent are included in national policies. So far, the U.N. has promised to help set up various activities to acknowledge the IDPAD. As it did with the IYPAD, the U.N. encourages other groups, governments and organizations around the world to also hold their own events in celebration of the IDPAD. All events should help to further education about the health, economic status, history and culture of Africa’s descendants.