JR Smith is proving to be his own worst enemy 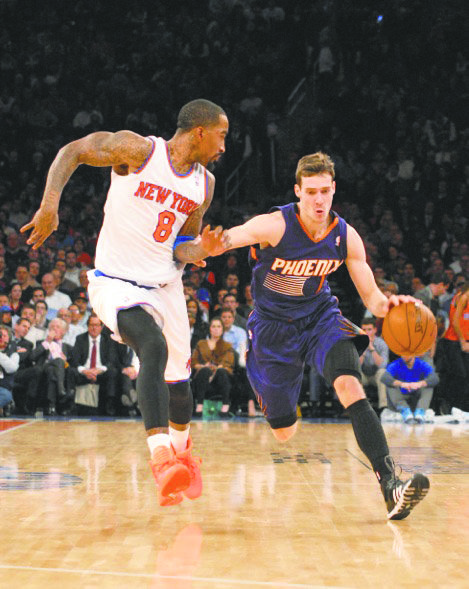 J.R. Smith’s childish behavior is risking his present and future career with the Knicks.

The best predictor of future behavior is past behavior.

This certainly holds true for J.R. Smith, the Knicks’ puzzling pain in the you-know-what. Oppositional, recalcitrant, immature, talented, conflicted—all of the aforementioned adjectives apply to the 28-year-old from Freehold, N.J., in the same manner it would a 16-year-old high school sophomore.

Indeed, no one can rationally defend Smith’s acts of insubordination and foolishness as nothing more than sophomoric during his relatively brief period with the Knicks. When the Knicks defeated the Phoenix Suns at Madison Square Garden on Monday night by 98-96 in overtime, improving to 15-22 with their fifth win a row, Smith was on the court for 25 minutes in this his 10th year in the NBA.

He finished the night with 10 points and missed an off-balance, game-winning jumper at the buzzer.

A Knick for less than two full seasons, Smith’s transgressions are mounting. Pick one: Contentious Twitter postings, a drug suspension or silently protesting head coach Mike Woodson’s criticism of his shot selection against the Chicago Bulls on Dec. 11 by attempting only one field goal in 26 minutes the following game versus the Boston Celtics. And most recently, being fined $50, 000 by the NBA for repeatedly untying opponents’ shoelaces, which led to Smith’s benching by Woodson in the Knicks’ 102-92 win over the Miami Heat last Thursday—their most complete game of the season.

Unsurprisingly, Smith expressed accountability thusly: “It’s the nature of the business.” The nature of the Knicks’ business is to construct a roster with reliable professionals. Smith does not fit that profile. Ironically, he’s extremely likable and seemingly raised with strong family values, instilled with a solid sense of right and wrong. That’s why Smith is so maddening for Woodson, who has been his most ardent supporter.

Smith is a headache for fans, too. He became one of the most popular Knicks in years in winning the Sixth Man of the Year Award last season but quickly betrayed their adulation.

Smith goes into tonight’s (Thursday) game against the Pacers in Indianapolis carrying his lowest offensive output since the 2005-06 season. He certainly can do a 180-degree turn, yet the prevailing question remains: Is Smith an asset or liability?