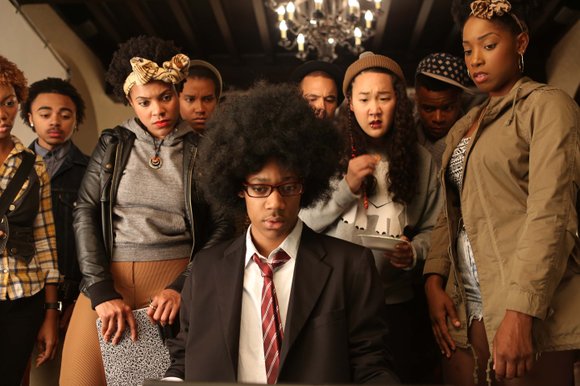 On Jan. 6, I opened an email that made my cinema-loving soul do a little dance. It read:

We are pleased to offer you a General Press credential for the 2014 Sundance Film Festival, to be held Jan.16-26 in Park City, Salt Lake City, Ogden and Sundance, Utah.”

“Pleased.” I like this word. I’m as pleased as a pig in mud that the festival recognizes and appreciates the New York Amsterdam News’ commitment to the art and artists from every corner of the globe.

However, I am as overwhelmed as a diabetic at a baking convention and equally dizzied at the prospect of sampling all of the goodies. Good choices are piled on top of great choices, which are hiding diamonds deep beneath festival hype.

Scrolling through my inbox, one film quickly caught my attention—and not because of the title “Dear White People” or the humorous publicity still.

What stirred my curiosity was the homegrown marketing campaign and the “roll up your sleeves and get it done” attitude that Los Angeles-based writer, producer and director Justin Simien demonstrated in the birth of this film.

“Dear White People” is about four Black students attending an Ivy League college where a riot breaks out over an “African-American-themed” party thrown by white students. With tongue planted firmly in cheek, the film explores racial identity in postracial America while weaving a story about forging one’s unique path in the world.

Respect. Simien has started earning it. “Dear White People” started as a concept trailer, found funding via a crowdfunding platform (IndieGogo) and has landed in competition with 15 other equally ambitious filmmakers.

I wanted to know what being in competition at Sundance means to him. So I did what I do—I went to the source.

AmNews: Justin, I’m impressed by your creative determination. “Dear White People” had an interesting start and is about to embark on an equally interesting journey. So Justin, what does being at Sundance mean for your career, short- and long-term?

Samien: I can’t imagine a better start to my career as a feature film director than to premiere this artful, topical, spirited film at Sundance. It’s something I’ve dreamed and vision boarded about since the first drafts of the script.

What’s great about a Sundance premiere is that it will ensure that this story gets the attention I think it deserves. It’s also great as a filmmaker to be embraced by such an artist-friendly community. I hope my future works will have as happy a birth as this one is having.

To listen to the winners on Jan. 25, who will be announced by hosts Nick Offerman and Megan Mullally, go to www.sundance.org/live.