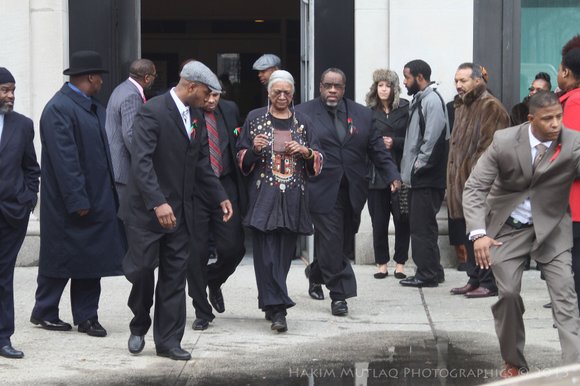 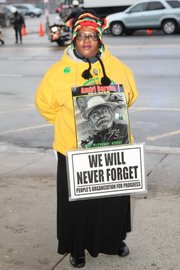 A cadre of activists, artists, intellectuals, politicians and revolutionaries convened at the Metropolitan Baptist Church in Newark, N.J., last Friday evening, then again at Newark’s Symphony Hall on Saturday morning to pay homage to the lifetime accomplishments of hometown hero Amiri Baraka (born Oct. 7, 1934). Following an undisclosed ailment, he became an ancestor on Jan. 9 at age 79.

The hip-hop progenitor is responsible for sparking an entire generation of critical, deep-thinking, uncompromising wordsmiths.

“He gave the whole concept of liberation poetry meaning and vibration,” reflected Abiodun Oyewole, founding member of the groundbreaking Last Poets. “He gave us some attention that we needed and taught us that you can make this poetry a revolutionary weapon and present it to the people in a way that poetry just wasn’t presented. That was his way of uplifting the culture, raising our consciousness and keeping that Black spirit alive.”

While race riots raged in many major cities across the country throughout the turbulent 1960s, an uncompromising ghetto griot rose from Newark’s ashes. Revolutionary poetry was his uncensored voice that he utilized to reflect America’s social climate.

“Amiri understood the power of the word … our spirit coming through our words, which create. They are like building blocks; they are energy,” assessed fellow poet Nana Camille Yarbrough. “He was a voice in the movement, speaking on how we must work together even if we don’t agree on everything.”

Despite Baraka’s scathing critique of Spike Lee’s portrayal of Malcolm X in his biographical flick, the Brooklynite director paid his respects on Friday, as did Oprah Winfrey. The evening was capped by the Rev. Jesse Jackson: “His voice, among those after Malcolm X and Dr. King’s assassinations, was felt and heard through his art, his politics, his action and his integrity.”

Actor and activist Danny Glover and movie director Woodie King hosted the event on Saturday, and Saul Williams, Jessica Care Moore and Sonia Sanchez were just some of the many poets who performed. Glover recalled how Baraka encouraged him to act while he was still a San Francisco State student in 1967. “So I often tell people that Amiri Baraka is the reason why I’m an actor,” Glover said.

“His consciousness was fired up, and he became more than just a poet, writer, creative genius … he became a political leader and refashioned himself. He was proud to be a part of the changes affecting the world.”

The author’s efforts to utilize his art form as a vehicle with which to relay relevant information to his community was not lost.

“He started the Black Arts Movement, where he used Black art, artists and musicians to articulate not just the conditions of Black people, but to help define the struggle Black people were engaged in,” observed professor James Small, Baraka’s comrade since 1966. “He was a poet and, at the same time, a revolutionary of the highest order.”