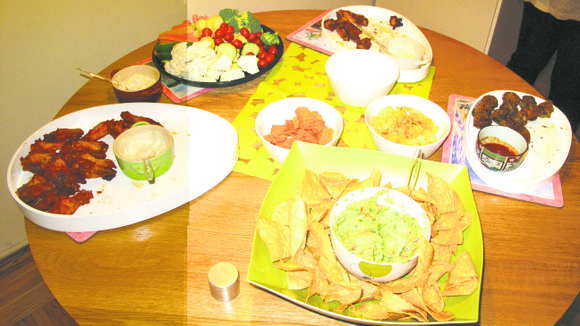 The spread Photo by Kysha Harris

Are you ready for some football?! I am sure all of you football heads are saying, “Really, Kysha?! The season is almost over!” I know this, but for some, like me, there is only one game to watch—the Super Bowl. It’s the time when the crew gets together, picks their winner, yells and screams at the television during the game, gets quiet for the expensive commercials and, of course, eats wicked good tailgating food—the latter of which is my favorite part.

Normally, this annual routine takes place at a friend’s house, but since New York/New Jersey has because blessed with hosting the 48th annual game this year, perhaps some might be doing their yelling and screaming in person at MetLife Stadium. For the foodies of football, this is your year to go deeper than wings and nachos, go farther than ribs and sliders, go beyond barbecue and beer and attend Taste of the NFL!

Taste of the NFL, a nonprofit organization dedicated to kicking hunger in America, is headed to Brooklyn to host its 23rd annual Party With a Purpose. The hunger relief event will take place on the eve of the Super Bowl, Saturday, Feb. 1, at Pier 12 of the Brooklyn Cruise Terminal.

Founded by Minneapolis restaurateur Wayne Kostroski in 1992, when Minnesota hosted Super Bowl XXVI, Taste of the NFL is known for its annual premier Super Bowl party that pairs renowned chefs from each NFL market with current, past and future Hall of Fame players. The event draws celebrities from all areas of the entertainment world to raise awareness and funds for hunger relief in cities throughout the country.

The 2014 Super Bowl marks a historic first for the NFL, as it’s the only outdoor, cold-weather Super Bowl hosted by two states. In accordance with Taste of the NFL’s model, proceeds from this year’s event will benefit the Food Bank for New York City (10 percent), Community Food Bank of New Jersey (10 percent) and Brooklyn’s Bed-Stuy Campaign Against Hunger (10 percent) as a gesture of goodwill to the borough for serving as the event’s host city. The remaining balance of the proceeds will be donated to the designated food banks in each of the other NFL cities, as well as key hunger relief organizations across the country.

“We’re proud to have the opportunity for our annual Super Bowl party to benefit those in need in New York and New Jersey,” said Kostroski. “Brooklyn has welcomed us with open arms, and Pier 12 will serve as the perfect backdrop to showcase the dedication and culinary skills of our partner chefs as we raise funds to help kick hunger nationwide.”

Additional highlights of this year’s Party With a Purpose include featured chefs from the New York area and special appearances by cast members of TLC’s “Cake Boss” and the newly crowned Miss America. There will also be a silent auction with sports memorabilia, travel opportunities, culinary packages and more.

Tickets prices are not for the faint of heart, but the proceeds are for a good cause. For more information and details, visit www.TasteoftheNFL.com. And for those who can’t make it to the event but still want to support Taste of the NFL’s mission to kick hunger, they are encouraged to log on to www.KickHungerChallenge.com and make a donation in the name of their favorite NFL team—proceeds will directly impact the donation of meals to those in need in their team’s community.

P.S. A very happy birthday today to my beautiful sister Heather! I love you!

Kysha Harris is a food writer, culinary producer, consultant and owner of SCHOP!, a personalized food service offering weekly and in-home entertaining packages. Questions? Comments? Requests? Feedback?  Invitations?  Email her at kysha@iSCHOP.com, follow her on Twitter and Instagram @SCHOPgirl, on Facebook www.facebook.com/SCHOPnyc or chat with her on Instant Messenger at AskSCHOP, Monday-Friday, 6-8 p.m. For even more recipes, tips and food musings subscribe to her blog at www.talkingSCHOP.wordpress.com.