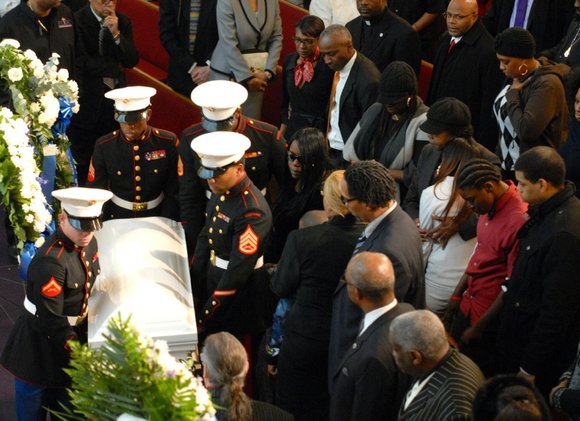 The heart-wrenching scene of a pre-schooler lying in a coffin touched the emotions of the 100 or so mourners who trekked through Tuesday evening’s heavy snowfall to attend memorial services for 4-year-old torture victim Myls Dobson at Harlem’s First Corinthian Baptist Church, 1912 Adam Clayton Powell Jr. Blvd.,pastored by Rev. Michael Walrond. The child’s grieving mother and grandmother choked back tears as four uniformed Marines carried the miniature-sized white casket down the aisle to the front of the church’s seating section. Upon lifting the coffin’s lid, the most unlikely image of little Myls’ embalmed body was displayed.

“Truth of the matter is that all of our hearts should be grieving tonight. Whenever a life is so uncorrupted, without blemish, the world has not gotten a chance to get to him.”

During the morning of Jan. 8, Myls was discovered lying unconscious and unresponsive in the tub of a Ritz Plaza suite in Midtown Manhattan belonging to Kryzie King, his father’s 27-year-old transsexual acquaintance. The youth had been tortured and was pronounced dead at Roosevelt Hospital.

King later admitted to traumatizing the youth, beating him with a wire hanger and belt, burning him with cigarettes and leaving him outside on the freezing balcony wearing only underwear. Police found him with burns and lacerations across his arms, legs and genitals and with white foam around his mouth.

Investigators said King also starved the boy, last feeding him on Dec. 26, causing him to lose 14 pounds in 18 days. Myls’ body only weighed 37 pounds. The medical examiner performed an autopsy the following day, but the cause of death has yet to be released. King was arrested on first-degree assault and reckless endangerment charges, but further charges could be filed after autopsy results are released.

When Myls’ father, Okee Wade, was arrested last month for missing court on fraud charges, King began looking after his son. Myls had been monitored by the Administration for Children’s Services for about half of his life, eventually leading to his mother, Ashlee Dobson, losing custody of him in October 2012. The Administration for Children’s Services (ACS) started an investigation into Dobson in January 2011 after she was allegedly seen beating her son in a parking lot, and his father was then given custody.

“Somebody at the ACS needs to be held accountable,” suggested the Rev. Al Sharpton.

“The value of this young boy, if it is excused, will devalue every child in this city. The only way that they will understand that they’re going to have to take every child seriously is for somebody to be held accountable for this child! The city has an obligation here, and we cannot allow this to go unchecked and not dealt with! When we’re too busy and too big and too caught up to pause and say, ‘Wait a minute, our children are not being protected’ … then we are not worth anything that we claim we are!”