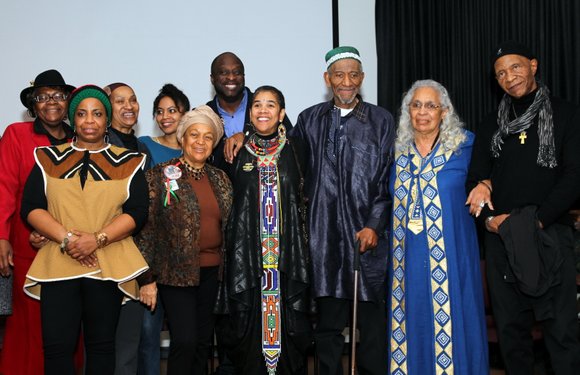 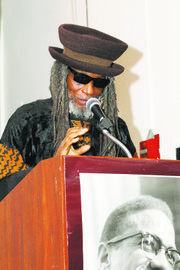 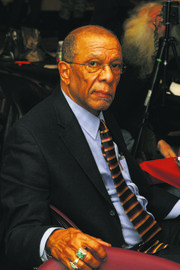 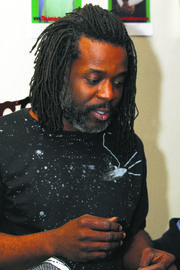 They may be moving slower, but you better believe that as long as they have breath in their bodies, Herman and Iyaluua Ferguson will moving forward, working for our people’s liberation as they always have.

Referred to as the “Dynamic Duo,” these two committed human beings—committed to each other and committed to our struggle—finally got some of the recognition they so much deserve. It was the Malcolm X Commemoration Committee’s (MXCC) 18th annual dinner tribute to “our freedom fighters” and their families.

While including the essential items of each year’s event—excellent food, moving testimony, and resources for the political prisoners, all the consequence of the extraordinary effort of Dequi Kioni Sadiki, MXCC’s passionate leader—this year’s dinner differed: It spotlighted the Fergusons, the elders who initiated and ran the dinner for years. Not just for their commitment to the dinner, but more for their incredible life commitments to our struggle.

Arguably, the most moving tributes may have come from freedom fighters themselves, who each reminded the audience of the depth of this couple’s commitment. Sundiata Acoli, who has now been in prison for 41 years, reminds us that Baba Herman was not just targeted for his formation of the Jamaica Rifle and Pistol Association. He was also targeted for COINTELPRO neutralization for the revolutionary character of his work as a principal in the New York City school system in the late 1960s in the epic battle for community control of the schools. In Harlem, Bed-Stuy and the Lower East Side, Blacks and Latinos were fighting to have more teachers who looked like their children and curriculum that reflected and respected their identities and more. They were confronted with a teachers strike that sought to cripple those efforts by the white-dominated teachers union. Herman Ferguson was organizing Black substitutes and parents to fill the roles of teachers to keep the schools going while the community fought for more self-determination.

In the end, it was COINTELPRO that attacked the forces driving the struggle for community control, or as Acoli aptly put it, it was “all as a part of the government’s collateral attack, leading up to its ultimate use of overwhelming force to crush the community control school board and movement.”

Dr. Mutulu Shakur, who has been in prison since 1986, keenly observed, “Herman and Iyaluua are synonymous with each other like Winnie and Nelson, but our Dynamic Duo did not divide over strategic tactics to resolve our contradictions.”

Zayid Muhammad, the organization’s founding press officer, built on Mutulu’s observations. “While the story of Baba Herman and his class suicide is well known and saluted, let us also appreciate Mama Iyaluua’s. They got together just as Herman was coming under real governmental fire, and she gave up ‘her’ life and career and all its possibilities to stand by this man, especially when he went into exile, and they have stayed together. That is an enormous sacrifice on her part that we should all appreciate,” he said.

Sekou Odinga recounted how he was politicized by the militance and community organizing of Herman Ferguson as a teenager. Odinga, now incarcerated for 32 years, also recounted their recent joint efforts with a particular appreciation of their publishing the Nation Time newspaper for several years in a row.

Their biggest surprise source of praise came when ailing people’s lawyer Lynne Stewart came into the room to a rousing applause. Stewart had just been released on Jan. 1 after an intense campaign to secure a medically compassionate release. Stewart, who had been serving time on an aiding terrorism conviction, has been fighting life-threatening breast cancer.