MLK, redefined as a politician 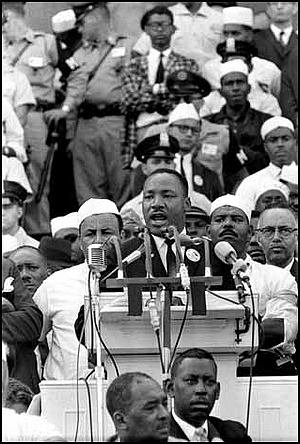 As the nation prepares to celebrate Martin Luther King, Jr. Day on January 20, actor Brandon J. Dirden hopes that people will not only remember King as a powerful reverend and activist, but also as an astute politician. Dirden portrays King in the forthcoming Broadway play, All the Way which begins previews on February 10. The political drama is an inside look at the first years of Lyndon B. Johnson’s presidency and his determination to pass the Civil Rights Act of 1964. According to Dirden, passage of that legislation couldn’t have happened without King’s political skills, despite never running for office and declining to publicly endorse a political party.

“He was an extraordinary politician to deal with presidents and senators to get civil rights laws in place,” said Dirden. “He also had to deal with organizations in the civil rights movement like The Southern Christina Leadership Conference and the NAACP and keep them together because they had different agendas. In the play we see him maneuvering like a real politician.”

Dirden’s discovery of King’s political side not only helped him find a new angle to explore in his portrayal of the icon, but it also influenced his perspective on today’s politically divided climate where lack of bipartisanship has led to 73% of Americans disapproving of Congress. “What Dr. King tried to impress upon people who wanted all equal rights now was that we will get it eventually, but let’s prioritize what we really want now. He knew that without political compromise there is no progress. The political landscape in 2014 is seeing republicans and democrats who won't give an inch. People are upset with President Obama for being too passive and soft but he understands that it happens in steps.”

One of King’s most urgent messages was the need to build coalitions across various cultures. In the documentary “Upaj: Improvise” this lesson is embodied through the artistic collaboration of 26-year-old African-American tap star Jason Samuels Smith and 62-yer-old Indian Kathak guru Pandit Chitresh Das. The film follows Smith and Das as they spin, tap, twirl and twist to create “Indian Jazz Suites,” a fusion of tap, the Indian classical dance form of Kathak, live music, call-and-response and lots of improvisation. The project directed by Hoku Uchiyama premieres January 20 as part of the sixth season of “AfroPop: The Ultimate Cultural Exchange,” hosted by actor Anthony Mackie.

For Smith working with Das was a lesson in overcoming preconceived notions as they are more than 30 years apart in age and come from different cultural backgrounds. “When I met him I didn't know what to expect from him or his world. So I'm sure I was more apprehensive in terms of allowing him into my world. I think during the process of our tours and filming we learned that we have these different things on the surface but after spending more time together we realized we really want the same things in life,” said Smith.

One of those shared goals is the preservation of their respective dance forms by allowing it to evolve for a new generation with the help of the Internet. “For some reason people think tap is just what they see in vaudeville and minstrel shows. A lot of those ideas of what people think tap is or was can hold some back from using their imagination of how to use tap and incorporate it in society today. The same problem exists for Kathak as people imagine it in a romanticized time in the past. We don’t get a lot of mainstream exposure but we’ve been able to survive on the Internet. It’s been a saving grace of both our art forms to keep them in the public eye and in a contemporary perspective.”

Dancers from the Dance Theatre of Harlem

Merging Martin Luther King, Jr. Day with dance is one way to keep the legacy of King relevant and fresh for younger generations. On January 17 and 18, the New Jersey Performing Arts Center hosts its annual celebration of King’s holiday with performances, classes, a keynote address and a ceremony honoring community members who epitomize the “dream” that King shared with the world. The legendary Dance Theatre of Harlem will also return to the NJPAC stage after a decade to help pay tribute to King.

From Broadway to dance, King’s legacy remains in the spotlight.