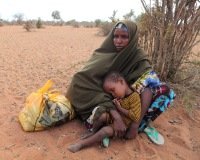 Jan. 29 (GIN) – The U.N. refugee agency is appealing to countries not to deport Somali asylum seekers to their country of origin as the situation in southern and central Somalia is still unsafe and Somalis fleeing those areas are in need of international protection.

“Monthly fatalities fluctuated between 100 and 600 people,” she told reporters. “Last June, fierce fighting resulted in 314 casualties in Kismayo alone. Civilians risk being killed or wounded by crossfire between government forces and al-Shabab militants as well as by bomb attacks and as bystanders in targeted attacks.”

Lejeune-Kaba said there is a perception the situation in Somalia has stabilized because it no longer makes headline news. However instead of open warfare as before, she said, the combatants drop a bomb or attack.

Meanwhile, over the past weekend, a U.S. drone killed a senior Shabab commander in a late night missile strike. Using his twitter account, President Hassan Sheikh Mohamud called the killing a decisive blow to the militant group. The strike took place just a day after 4,395 Ethiopian troops were formally absorbed into the African Union force, also known as AMISOM, according to the Sudan Tribune.

Ethiopia's contribution takes the AMISOM force to the 22,000-strong level mandated by the UN Security Council. "The Ethiopian deployment will permit Burundian and Ugandan forces to move into parts of Lower and Middle Shabelle," a news release from AMISOM was quoted to say.

A Shabab spokesman responded to the new developments. "We defeated Ethiopia before and we know how to battle them now," he said, adding that the inclusion of Ethiopian forces shows a weakening of the AMISOM force.

"It reflects the fact that Somalia has been partitioned between Kenya and Ethiopia, and the international community is legalizing that partition.” Under the new AMISOM concept of operation - to be implemented in the near future - the Ethiopian forces will take over sector 3 and help Djiboutian peacekeepers who are in charge of sector 4.