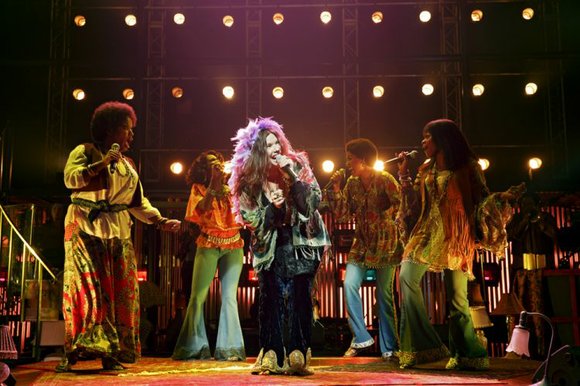 “A Night With Janis Joplin,” currently knocking audiences sideways with nuclear-fueled rock and roll at the Lyceum Theater, is much more than the title suggests. The poster and other marketing elements give the illusion that it’s more of a concert than a musical. It’s neither and it’s both.

Nostalgia seems to be the unifying cord of Randy Johnson’s musical time capsule. The time machine lever is firmly locked on the psychedelic haze of the 1970s, exploring the inner workings of the rock icon whose husky, whiskey-soaked wails cut through the noise of the rock and roll boys club, forever earning her a distinct yet tragic place in rock history.

It’s remarkable to witness the transformation of Mary Bridget Davies into Janis Joplin, who died of a heroin and alcohol overdose at 27. Phoenix rising, ashes scattering, the metamorphous by Davies begins with the small details: Joplin’s impatient walk, her rebel stance and, most endearing, how she absentmindedly rubs her forehead when confronting uncomfortable truths.

Then Davies opens her mouth to sing, and the spot-on vocal impersonation of the legendary belter is, dare I write this, better than most recordings that I’ve heard of the immortal, tragic diva. Davies outsings Joplin.

A Night WIth Janis Joplin

Joplin’s life and signature sound were infused by the blues and inspired by women who are as legendary as Joplin herself. The hunger for love and the fight for equality, which are so much a part of the African-American sound that erupted in the 1930s, is why Janis Joplin sounded like Janis Joplin. She wanted to be Black and to share the stage with the women who made her feel alive: Smith, Odetta, Chantel, Simone, James and Franklin—all of whom get solid representation onstage.

Carrying the spirit of Odetta and Simone is the shimmering Tony- and AUDELCO-nominated Aziza, whose performance brings such a welcome and unexpected jolt that you are reminded that theater equals power—either that or the mischievous house technicians ran live electric wires under the seats.

You can’t get sincere soul without the “Queen of Soul,” Franklin, whose character takes center stage, sporting feathers, glitz and star power, effortlessly performed by Blackwell.

Staying in your seat will be a challenge because the live house band, under musical director Ross Seligman, takes hazy memories and sets the theater ablaze note by note. You will shake, rattle and roll, scream and shout, feel the blues and boogaloo.

The artist’s soul, immortal and re-examined, is what makes the book by Johnson, who also directed, such an original. Economically speaking, the producers really deliver two shows for the price of one. It’s Broadway with a soulful twist, and Odetta, Smith, James, Simone and Joplin would not only approve, but jump onstage to keep the party going at the Lyceum Theater.

The album and the CD is currently available at the Lyceum Theatre and amazon.com. For more information, visit www.anightwithjanisjoplin.com.