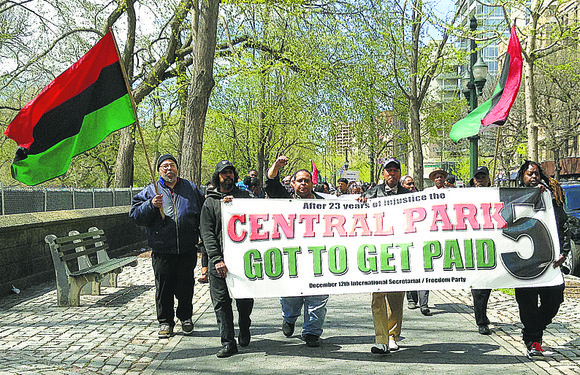 Is there light at the end of the tunnel? Is the end near?

For 25 years, the lives of five men—Raymond Santana, Yusef Salaam, Kharey Wise, Kevin Richardson and Antron McCray—have been in limbo. Though they were ultimately cleared of the 1989 Central Park jogger rape charges, they are still in a battle to have the city compensate them for the prison sentences they served, ranging from seven to 11 years each.

On Tuesday, Feb. 4 at 11:30 a.m. on the City Hall steps, newly elected Councilwoman Inez Barron will hold a press conference in support of the citywide demand for a rapid settlement of the Central Park Five case. With Magistrate Judge Ronald Ellis having stayed litigation on the case for 30 days, the councilwoman stated, “This press conference is an opportunity for elected officials to let the mayor know that we take very seriously his oft-reiterated promise to end this 25-year-old tragedy and travesty of justice as quickly as possible.”

Members of the Central Park Five, their attorneys as well as long-term supporters, such as state Sen. Bill Perkins, the December 12th Movement and the Freedom Party, will be there.

“In federal district court Tuesday afternoon [Jan. 21], Ellis agreed to put litigation in the Central Park Five case on hold for 30 days so that new corporation counsel chief Zachary Carter can get up to speed in order to settle this nearly 25-year-old tragedy,” said attorney Roger Wareham, co-counsel for McCray, Richardson and Santana. “Lawyers for the City Law Department joined in the plaintiffs’ lawyers’ request that no more time or taxpayer money [reportedly $6 million] be spent on this case, which Mayor [Bill] de Blasio has repeatedly indicated should be settled. Lawyers for the plaintiffs are determined to do everything possible in the next 30 days to reach a settlement.”

Carter did not respond to an AmNews request for commentary. Neither did de Blasio. However, the new mayor has repeated that the case should be settled, and when he announced his appointment of Carter as the city’s top attorney, he stated, “We will settle the Central Park Five case because a huge injustice was done.”

In 2002, just happening to cross paths with Kharey Wise in prison, Matias Reyes, a serial rapist and murderer, confessed that it was he who attacked and raped Patricia Meili, the 29-year-old investment banker who had been jogging through Central Park back in April 1989.

With a definitive DNA match, attorney Michael Warren, the Innocence Project and many other legal professionals and lay people alike fought to get their convictions vacated. They were released in 2002 by Robert Morgenthau, the same district attorney who presided over the controversial, high-profile case 14 years prior.

Yet, 12 years later, they are still waiting for a seemingly reluctant city to admit complicity in the case. They acknowledge that, that may never come, but they and their panoramic defenders do anticipate that the city will settle the $250 million lawsuit as soon as the dragged out case hits a quarter century.

“April 19 will mark 25 years of this tragedy known as the Central Park Five. Mayor de Blasio has explicitly stated that the case should be settled,” said Wareham. “We expect that during this month-long stay in litigation granted by the court, the city will seriously engage with us to end this needless—but so American—racist travesty of justice. We encourage all concerned people to tell their elected representatives to let the mayor know that they too demand immediate justice for the Central Park Five.”

Warren told the AmNews, “Both sides agreed to a 30-day adjournment of further depositions to facilitate our ability to try and settle this case for an amount that is fair and is commiserate to the suffering to their plaintiffs and their suffering. Mayor de Blasio has already stated that this case is going to be settled under his administration, and he said that this was a gross miscarriage of justice.”

Unnamed sources close to the case say Carter is willing to sit down and talk about the settlement.

“It’s about time that the Central Park Five got their money from the city,” observed former Councilman Charles Barron. “These young men had their lives ruined by a criminal justice system that has known of their innocence from the beginning. Is it enough? We anticipate that the new corporation counsel for the city, Zachary Carter, will come to the table and settle this case quickly.

“Will any amount of money compensate them for all their years of suffering? Probably not, but those young men and their families must be able to move on now with their lives. We will celebrate the settling of this horrendous case as a victory for the movement.”

Warren concluded, “The settlement amount must be fair and reasonable and necessary considering the stigma still attached to them after 25 years and the theft of their childhood that they will never be able to recover from. Add to that the condoning of that story by then Police Commissioner Ray Kelly, Mayor Ed Koch and the corporation counsel and one of the current defendants and Linda Fairstein, not to mention former Officer Mike Sheehan. They attempted to legitimatize an injustice and profound wrong and the gross miscarriage in the annals in the criminal justice system in this case. It is indeed another Scottsboro Boys case.”

Warren said that all elected officials and ministers and activists “should be screaming for fair justice forthwith because they come from us.”