On the Verge: De’Adre Aziza 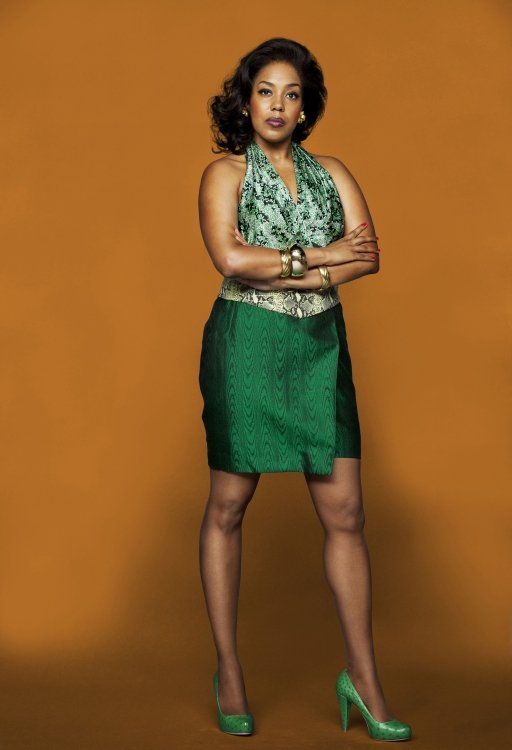 It doesn’t take long to understand De’Adre Aziza. She’s a chameleon—a strutting, blues-belting chameleon who channels the deep-rooted, soulful vocals of folk singer Odetta and the sultry Nina Simone in “A Night With Janis Joplin,” written and directed by Randy Johnson and choreographed by Patricia Wilcox.

The Joplin of legend lived hard and died young, having succumbed to an overdose at the age of 27. “A Night With Janis Joplin” has the impressive Mary Bridget Davies in the lead role, and her spot-on interpretation of the late rocker is almost eerie.

The sad facts surrounding Joplin’s life are verifiable, but few know that her husky sound was shaped because of her passion for African-American music and the women who expressed their melancholy in song. This revelation in Johnson’s production makes a fascinating, comforting and blissfully uncomplicated theatrical experience. When in doubt, you can almost hear the spirit of these singers saying, “Just sing out your lust, joy and pain; just sing the blues.”

Aziza bristles with originality and feeling, creating the seamless illusion that time has been turned back. So I reached out to Aziza, and here’s what she had to share.

Amsterdam News: The expression that “Black don’t crack” has to be amended. Let’s go with “Black doesn’t even crease.” Honestly, based on the nuances in your performance, I was expecting a more seasoned thespian. What are you, like sweet 21?

AmNews: Where did you grow up?

DA: Teaneck, N.J., but I feel like I’m a Harlem girl. My grandmother was a well-known community member in Harlem and a strong vocalist in her church choir. Of course, too, I grew up reading the Amsterdam News. It was always in the house, along with Essence, Ebony and Jet.

AmNews: Sweet! Did you grow up knowing that you wanted to be a actress?

DA: Absolutely not. That desire came to me in my early teens.

AmNews: Could you always sing? Did you train? Mama, you can wail! You transform into Odetta and Nina Simone. It’s so great to watch.

DA: (Laughing) Thanks. Well, I took classical piano at age 4, and I grew up with a lot of music in my consciousness, especially in Harlem. I was also exposed to African drumming. To learn, I’d listen to albums over and over again. Along the way, I just fell in love with live performance.

AmNews: You were nominated for a Tony for “Passing Strange.” What’s it like being back on the Great White Way? A nomination is nothing to sneeze at!

DA: Absolutely wonderful. Theater is transformative. When my son was 2 years old, I took him to see “The Lion King,” and he watched the entire show without making a sound. On our way home, he turned to ask when he could see it again and proceeded to tell me about the story elements and sing the songs. That’s when I truly discovered the power that theater can have over a person.

AmNews: Great story. The same thing happened when my mother saw “The Lion King.” What’s your take on Joplin’s connection to our culture? The stage gets filled with the soulful sounds and rocks the house all the way to the second curtain call.

DA:These women are all great, and they have become icons of music despite the challenges that shaped their lives. They went through a lot in the industry in order to achieve their goals. That’s admirable. These women—Bessie Smith, Odetta, Chantel, Nina Simone, Etta James, Aretha Franklin—are artists, not just singers.

I was pleasantly surprised that Janis loved Black music and so closely identified with the Black struggle.

This show is about the soul of this woman, who was herself a bold soul. We can all have the blues regardless of our background, and music ties those shared feelings. It’s an intimate and powerful connection.

The audience most certainly connected the night I saw the show, breaking out in applause and taking to their feet to sing.

You’d have to be a zombie not to feel the soul and passion from this musical. FYI, the audience does that most every night.

AmNews: Is it a concert in a play? A homage to African-American soul singers by way of Joplin’s story? What do you want people to leave the experience with?

DA: I hope audiences walk away with an understanding that there are two sides to every person. If you love music and listen to these arrangements, you will get lost in it.

“A Night with Janis Joplin” is playing at the Lyceum Theater, 149 W. 45th St. Running time is two hours and 15 minutes. Visit www.anightwithjanisjoplin.com for more information.