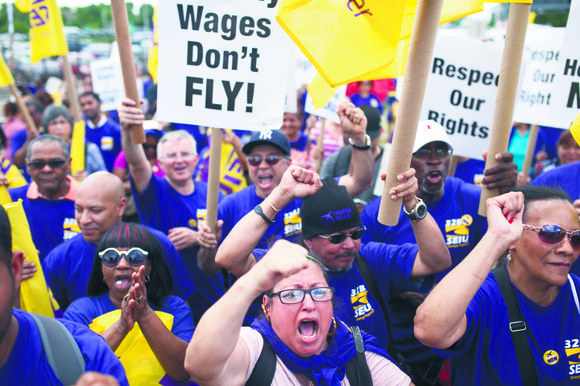 Airport workers continued to fight for their rights last week during a rally at LaGuardia Airport.

The 100-day campaign counts down to Sept. 30, which is the deadline for the Port Authority’s plan for enhanced wages and benefits, including health care.

“We are here to tell the wealthy airline companies and their poverty-wage contractors that it is long past time for them to start paying you a fair wage, with benefits and a pathway to the middle class,” Figueroa said to workers. “You work hard and you deserve a good union contract and the right to make the same wages and benefits as the people who work directly for the Port. Same work, same pay!”

Some of the elected officials on hand to support the workers included Hazel Dukes, president of the New York State Conference of the NAACP; the Rev. Willie D. Francois III, First Corinthian Baptist Church; and newly re-elected Rep. Charlie Rangel.

“I am here today, and I will be here until we win,” said Rangel to the workers. “The middle class is being squeezed out. People can’t afford to pay their rent or tuition for their children. We cannot afford to have workers pushed into poverty after working hard all day.”

Last month, thousands of airport workers voted to designate 32BJ SEIU as their union and to negotiate on their behalf. Now, workers want results.

“We work long, hard hours and can barely feed ourselves and our families. That’s not right,” said Nelly Escobar, a cabin cleaner at JFK.

“This is not the last time you will see us,” said Gian Lopez, a baggage handler at LaGuardia. “We need a union contract to give us fair treatment and a strong voice.”