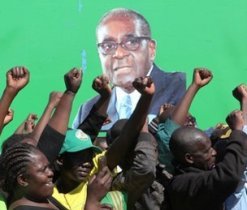 Echoing similar sentiments from a decade ago, on July 2, Zimbabwe’s President Robert Mugabe demanded that the remaining European “landowners” rightfully return “their property” to his nation’s indigenous inhabitants.

Implementing one of the harshest policies in his country’s land reform movement, Mugabe addressed farmers in Mhangura, a small mining town about 120 miles north of its capital Harare.

“I have been given a list of 35 white farmers in Mashonaland West alone and in just a few districts that have been audited. We say no to whites owning our land and they should go,” Mugabe told the crowd. “They can own companies and apartments … but not the soil. It is ours, and that message should ring loud and clear in Britain and the United States.”

Mugabe suggested that the several hundred remaining Caucasian colonizing farmers should leave. He also refused to allow Caucasian families renting farms from African owners to stay, which is what some had been doing since being violently chased away and having their farms seized a decade ago.

“There are white farmers who are still on the land and have the protection of some cabinet ministers and politicians as well as traditional leaders … that should never happen,” he stated. “They [Caucasians] were living like kings and queens on our land, and we chucked them out. Now we want all of it.”

Mugabe, 90, has governed Zimbabwe since its independence in 1980. He came to power on the heels of the Lancaster House Agreement, which established that he couldn’t make any land reform changes for a decade. After numerous attempts to redistribute land back to Africans, in 2000, the Zimbabwe government instituted the Fast-Track Land Reform Program, which violently forced Caucasian farmers off “their lands” without compensation.

The government reportedly seized 110,000 square kilometers of land, and millions of Black farmers were said to have become unemployed. By 2005, the Parliament agreed to nationalize all farmland, silencing farmers who wanted to contest the land grab in court.

A decade and a half ago, Mugabe, a former guerrilla leader, embarked on a revolutionary nationwide campaign for land reacquisition, where his supporters forced thousands of Caucasian commercial farmers to turn over their territory under a so-called “indigenization” land reform policy.

Mugabe was reelected last summer to his fifth consecutive term with 61 percent of the vote while outing his own associates who make lucrative profits by owning farmland and renting it to Caucasians. Mugabe characterized this practice as unpatriotic under his notions of indigenous Black African nationalism. The president’s Zanu-PF party also gained a parliamentary majority of more than two-thirds, winning 160 of the 210 seats.

Following this presentation, the 90-year-old leader collapsed. It was reported that he was immediately rushed back to Harare for evaluation. Rumors about Mugabe’s health have circulated for some time, but as he is advancing in age, speculation has increased over the years.

Despite official denials, it is widely believed that Mugabe is being treated for prostate cancer.