Son’s murder motivates dad to shepherd community away from violence 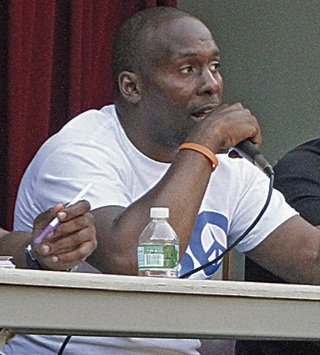 After an insufferable tragedy, there is occasionally a glimmer of optimism, a light at the end of the tunnel, an emblem of solace to comfort us until we’ve recovered.

In 2009, Chris Foye lost his son Christopher Owens when he was accidentally shot while attending a Bronx barbecue and an altercation broke out. Since then, Foye has dedicated his time to retooling the community with his nonprofit, the Chris Owen’s Foundation, steering young people away from street life and violence.

“I’ve been coping from day to day,” he lamented, “staying busy by helping others.”

All of the circumstances he’s had the misfortune to face have motivated him to act against violence in the future. His purpose has become educating and developing his community, building from within and fending off the toxic influences that tend to seep through, especially when gun violence and gun deaths go ignored.

His son was just 15. Christopher Owens' whole future was ahead of him. He had recently returned home from visiting Southern historically Black colleges before his life was taken too soon.

Foye’s past, though unchangeable, has become a driving force for future change and prevention of incidents all too familiar in urban areas across America. In his early 20s, Foye also lost three childhood friends to street life. He never had his father to lean on growing up. He said he shares this lived experience with kids today, believing these commonalities to be an asset to build bridges of communication and trust, filling the void left behind.

“I want to be that Black man to speak up,” he said. “Someone from the community who’s experienced [loss] first hand and [still] uses [his] power to inspire change and provide political, sociological and economic leadership.”

On July 1, Foye’s foundation teamed with another New York City foundation, Man Up!, to hold the first “Peace Is a Lifestyle” conference and “Body of Peace” memorial walk to honor everyone lost to gun crimes. Foye said the name “Body of Peace” is meant to emphasize that full control and total reasoning allows talented people to take action without underutilizing their skills. That is, energy is wasted without using the whole body.

He went on to mention that everyone involved in developing the events bring assets to the cause, whether that is a mouth to communicate their message, the wisdom to manage action or the courage and heart to initiate action since none of the former efforts would have meaning or substance without heart and courage.

Foye’s motto is “Ending gun violence starts with you.” He’s desperately trying to make sure everyone hears it.