African Burial Ground in East Harlem to be memorialized 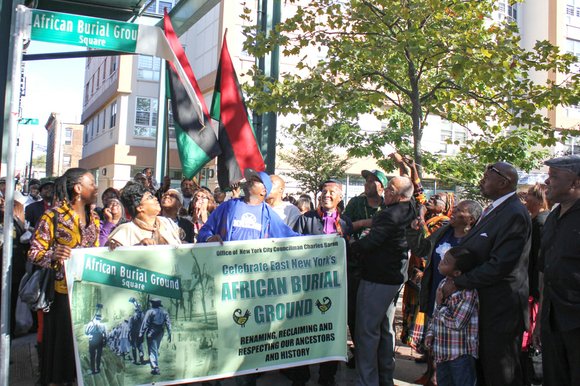 Originally scheduled for renovation throughout 2015 to 2019, the MTA’s bus depot at 2460 Second Ave. (between 126th and 127th streets) will instead shut down permanently Jan. 5, 2015 to make way for an African Burial Ground memorial.

A major ancestral awakening of New York City’s sordid slave history occurred in 2008, when Department of Transportation employees unearthed a 17th century African gravesite while refurbishing the Willis Avenue Bridge. The MTA offered to renovate the area in 2010.

“They emphasized one thing,”said Patricia Singletary, leader of the Harlem African Burial Ground Task Force, which seeks preservation and official recognition of the cemetery. “That was, ‘We’re going to be very respectful of the bones,’ and they repeated [it]. Well, that unnerved us because if they said that, they must have found something.”

The land—previous property of the Reformed Low Dutch Church of Harlem, later known as the Elmendorf Reformed Church, from 1665 to 1869—started as a cemetery after land-grabber Peter Stuyvesant had enslaved Africans, in the mid-1600s, build a nine-mile road from lower Manhattan to what was then a rural area named Nieuw Haarlem. He erected a church on First Avenue between 126th and 127th streets, setting aside a quarter acre of land later known as the “Negro Burying Ground” and eventually, “The Harlem African Burial Ground.”

Church records indicate that an unknown number of free, as well as enslaved, Africans from all over Manhattan are buried there.

“The Harlem community is watching and very concerned about what’s going on,” said Singletary, also pastor of Elmendorf Reformed Church, now at 171 E. 121st St., which owns the land. “We just want the burial ground to be memorialized, properly commemorated and preserved.”

City Council Speaker Melissa Mark-Viverito added, “We’ve already started to work on [the memorial]. Residential is a thought, but it has to be done in a respectful way.”

In 2010, the MTA planned to upgrade the dilapidated depot next year, but activists’ demands that it be converted into a memorial scuttled the plan.

Once the MTA evacuates the depot, which opened in 1947 as a trolley yard, the site will revert back to city control under a lease agreement between the two.

Before construction begins, an excavation must take place. Mark-Viverito contends the MTA will assist. The agency declined to comment.

The Rev. Earl Kooperkamp of St. Mary’s Episcopal Church on West 126th Street. added, “These were the founders, the ancestors of this parish. I want to see it as a memorial to these ancestors. It doesn’t need to be a bus depot. We could lose one.”

Eric Tait Jr., vice president of the Harlem Preservation Foundation and a member of the Harlem African Burial Ground Task Force, who created the documentary, “Then I’ll Be Free to Travel Home,” about the lower Manhattan African Burial Ground, said, “Unfortunately the MTA and DOT seem determined not to learn from the 13-year battle our community fought in lower Manhattan beginning in 1991. That long, bitter struggle was a direct result of the General Services Administration’s federal bureaucracy and not having any persons of color or any concerned GSA person who would take seriously the cultural and historical significance of that African burial ground.”

Singletary concluded, “We recognize that both the DOT and the MTA are attempting to meet complicated transportation needs of the city. However, we are certain that both agencies can meet these needs without violating this sacred site or ignoring the community’s significant place in American history.”

Members ultimately plan to seek historic designation for the sacred land, as well as the construction of a museum/cultural center exhibiting documents and artifacts from Harlem’s slave past.

Those interested in contributing to the efforts of the Harlem African Burial Ground Task Force efforts are encouraged to contact Deborah Gibson at 212-534-5856.