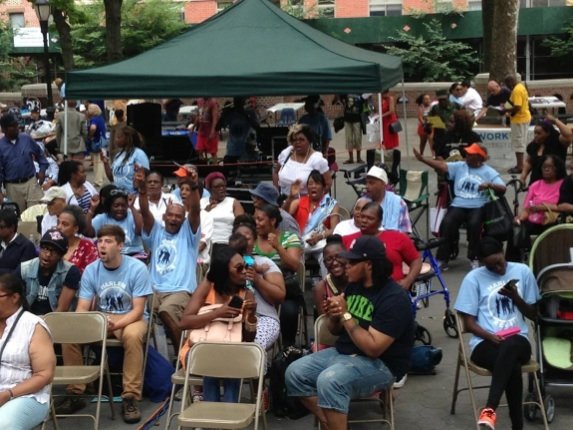 Hundreds of Harlemites poured into the Bradhurst neighborhood’s Jackie Robinson Park Amphitheater Saturday, July 19 to participate in “Harlem Revive!: A Community Day of Unity.” Presented by Harlem Congregations for Community Improvement, this community affair was designed to offer a social, emotional, spiritual and financial health revival for Harlem community residents.

Conceived and produced by the Rev. Dr. Charles Butler, HCCI’s vice president of equitable development, Harlem Revive united local businesses, which accepted job applications at the event; local clergy, who offered words of encouragement; youth groups, which entertained the children with arts and crafts; and community leaders and local residents, who exemplified a spirit of love and community engagement.

“Today was a combined effort to empower local residents and engage them in their own edification,” said Butler. “The budget was slim, and a team of nearly 20 local residents volunteered for weeks to make this happen.”

“We registered 51 people in two hours!” exclaimed Albert Tessai, 40, manager of the Gap on Harlem’s 125th Street. “Events like this make it easier for us to access local people. Plus, we really want to be part of the community.”

Public officials such as Rep. Charles B. Rangel, 71st District Leader Maria A. Luna and Assemblyman Herman Denny Farrell also attended. “I like to come out and walk and talk to my constituents and to the people of my community,” said Farrell. “And this is a good way to do it.”

Judith Castro, 69, a licensed social worker, testified, disclosing that she and her husband, Vernando Castro, 65, a retired mental health worker, started Just Kleen cleaning service after all three of their sons were incarcerated. “Two of them came home and could not find employment. Doors were closed. Their rent was due, and it was hard to watch them struggle, to see them crying.” The sons now work for Just Kleen, and 75 percent of Just Kleen’s employees were formerly incarcerated.

Just Kleen currently specializes in helping horders restore order in their homes, has contracts with social service agencies and serves individual residents. When asked if Just Kleen was hiring, she laughed and said, “We have plenty of employees. We need work!”

Harlem Revive! was a big hit with children and families, as Arts Horizons (an art gallery located in the Bradhurst neighborhood) taught children to make portraits and collages. Plus, the Riverside Church donated nearly 100 toys and crafts, managing three craft tables for local children.

Marc Polite, 35, a Harlem native, author and award-winning blogger, attended with his wife, Latisha Polite, 35, and daughter Clarissa Polite, 4. “We came out for the kids’ activities and to be a part of our community,” he said. “We live nearby and frequent the park for youth activities. So it was nice to participate in something for the whole family.”

London Knight, 38, and his wife, Ralanda Knight, 47, attended with their son Handsome Bazile, 8, who donned a jeweled crown he made in the crafts area. “This is nice and joyful,” said Ralanda Knight. “We’re friends with the DJ. This is our second year attending.”

Her husband added, “We need more things like this.”

Derek Broomes, president and CEO of HCCI agreed. “We look forward to presenting this affair next year, and for many years to come,” he stated.