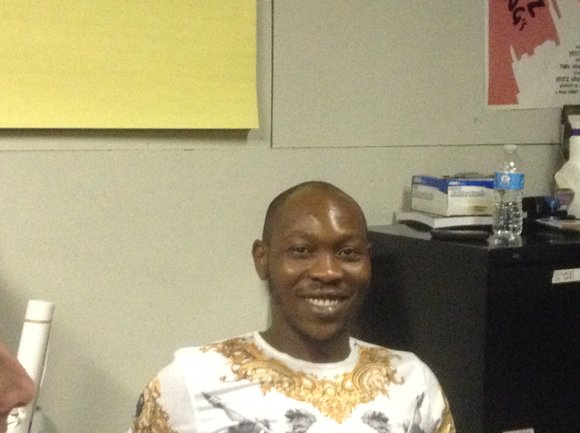 Seun Kuti, 31, is the youngest son of musician/activist and founder of the Afrobeat rhythm, Fela Kuti. The new film about his father’s life and the making of the successful and Tony Award-winning musical, “Fela!,” is directed by Alex Gibney and executive produced by Stephen Hendel and Ruth Hendel (the producers of the Broadway stage production). The film opens Aug. 1.

When I had the opportunity to sit down with Seun Kuti in New York City, he was just completing the last leg of his world tour to promote his new album “Seun Kuti & Egypt 80: A Long Way to the Beginning.”

Music is in his blood. Music is part of Seun Kuti’s legacy, and the inheritance of his father’s extraordinary Egypt 80 orchestra, after Fela Kuti’s death in 1997, has placed the charismatic musical storyteller firmly in his father’s bold footsteps.

Make no mistake, Seun Kuti is his own man and comfortable in his own journey to keep the movement—to free his native Nigeria from oppression—alive.

If you’re not familiar with the inspiration found in the Afrobeat sound, log onto Google and start your playlist. Fela Anikulapo Kuti first fused jazz, funk and soul with highlife and other African rhythms, but with topical lyrics and contemporary influences, giving it a modern twist.

Seun Kuti appears in “Finding Fela,” where he sheds light on his famous father and comments on his impact on the world of music and politics.

Here is what we discussed recently in New York City.

Amsterdam News: Your music is a surprising mix of the “old” and the “contemporary.” How did some of the older band members respond?

Seun Kuti: Well, I think that good music will generally make you stay young. They enjoy what’s happening with the sound. Performing is like an exercise. Music is good for the soul.

Do you have family members playing in the band, besides your sister?

My sister left for university, so, she doesn’t sing anymore. I am musically related to the whole band. I cannot distinguish between my family and the band.

Do you listen to your dad’s albums, still?

Yes, I listen to them a lot. My two favorites are “Look and Laugh” and “Original Sufferhead.”

Do you feel that the success of “Fela!” helped bring a resurgence of interest in Afrobeat music?

It’s the message and the originality. It has universal appeal. It’s something people can relate to.

My father was not a prophet, despite being a chief priest of the Shrine, and I don’t believe in prophecy. Americans know little about Africa, and African- Americans, even less.

My father was a good, keen observer, and he must have seen the inevitable outcome. Nigeria is run by the Mafia. I mean, it’s really the Cosa Nostra that’s running the country.

What’s the memory of your father that stands out in your mind the most?

If there will be a free and united Africa in the future, will there still be a role for Afrobeat music?

Yes, of course. Performance is protest. There will be a role for Afrobeat music in Africa for at least the next 200 years. Music. It’s for the common people, and it’s their weapon.

Is there a message in the new film “Finding Fela” that people might miss and you want to share?

As director of “Finding Fela,” Alex Gibney (“Enron: The Smartest Guys in the Room”) crafts an insightful and provocative look into the life of Nigerian musician/activist Fela Kuti (1938–1997), his music and his social and political importance.