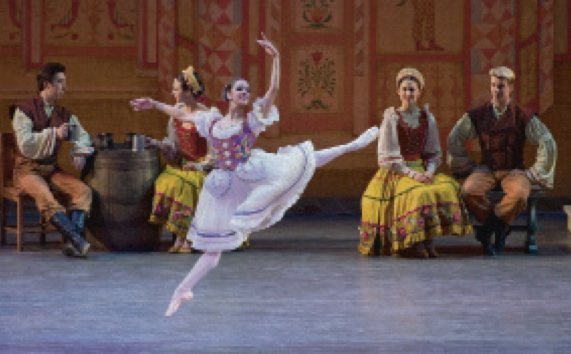 In the early 1800s, the Romantic Era of ballet was born: Ballerinas became well versed in gesture, vocabulary and pointe technique, and ballet skirts rose to the knee. Ballets were based on fantasy or exoticism. They focused on good versus evil, and ballerinas became the superstars, taking center stage while the men supported them.

In American Ballet Theatre’s (ABT) “Coppelia,” considered the last of the Romantic ballets, Misty Copeland made the fantasy real in her debut performance as Swanilda at the Metropolitan Opera House (May 30). The comedy-ballet tells the story of Dr. Coppelius, who mysteriously makes dolls and brings them to life. Coppelia, one of Dr. Coppelius’ masterpieces, manages to catch the eye of Swanilda’s fiance, Franz, and she sets out to change that.

The remarkable Herman Cornejo (ABT principal) as Franz was Copeland’s partner. Fittingly so, a roaring applause filled the theater when Copeland took the stage, then in all three acts, she commanded all that Swanilda’s character called for—emotion, animation and skill. Copeland and Cornejo are playful and perfectly paired in flirtatious duet after duet—chasing a butterfly in Act I or in their grand divertissement during the fete for their wedding in Act III. Copeland reins in Act II as Swanilda leads a curious pack of friends to investigate Dr. Coppelius’ guarded house—nervously wobbling her knees and shaking her arms overhead.

She eventually finds Coppelia, dons her clothes, and surprisingly, Dr. Coppelius enters. What follows is Copeland’s very funny animated imitation of Coppelia, as Dr. Coppelius manipulates her through abrupt and punctuated movements.

Copeland is lovely in her delivery of difficult balances, leg extensions and the soft follow through that each solo demands. As is the tradition of the Romantic ballet, Cornejo supported Copeland; he was her porteur, but in the short moments when he did dance, he was spectacular, especially in his signature leaps.

Stella Abrera as Dawn and Zhong-Jing Fang as Prayer were breathtaking. The production also included wonderful dancing by students from the Jacqueline Kennedy Onassis School at American Ballet Theatre.

This was a lovely version, staged and directed in 1997 by the late Frederic Franklin after Nicholas Sergeyev upon special invitation by ABT Artistic Director Kevin McKenzie. Franklin was recently honored by the annual program “From the Horse’s Mouth: The Men Dancers, Plus!”

The ABT season continues through July 5. Copeland will be featured in Kenneth MacMillan’s “Manon” June 3 and 7. For more information, visit www.abt.org.