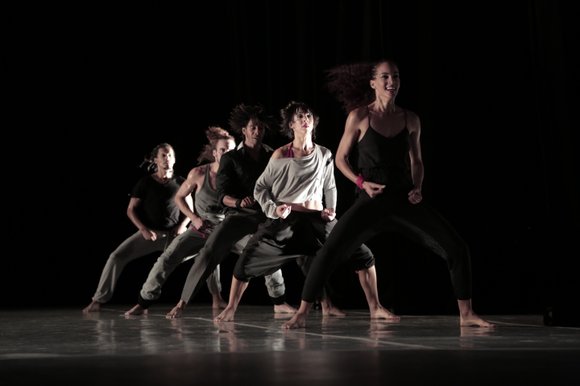 The two-year-old MalPaso Dance Company from Havana, Cuba, made its mark on New York City in its first U.S. appearance outside of Cuba at the Joyce Theater (May 27-June 1). From the start, what was apparent was the dancers’ precision and their ability to work so well together. At the end of the evening, this rang more true, because in just two works, this 10-member company showed its chameleon-like nature.

The evening opened with the very long “24 Hours Y Un Perro” (“24 Hours in a Dog’s Life”), which premiered in 2013, choreographed by founder and dancer Osnel Delgado Wambrug in collaboration with the dancers. Live and original music by the Afro Latin Jazz Ensemble, led by Grammy winner Arturo O’Farrill, accompanied the work.

The locked and lanky Wambrug entered first in a long solo of joint-driven, shape-shifting movement that would be seen throughout. Couples soon entered, seemingly compelled by loud horns inviting them to the stage, and then, in entangled duets, they championed various repeating phrases. In other groupings, they later offered unison movement sometimes set off by solos, showing their individual skill.

The work is long and the dancers are amazing, but some editing would have given it more punch. Though noteworthy, the interesting use of each musical segment seemed at times unmatched by the energy of the dance and vice versa.

The ever-changing pulse of Ronald K. Brown’s “Por Que Sigues” (“Why You Follow”), commissioned by the Joyce, closed the evening, and it was a hit. For this premiere, assisted by Arcell Cabuag, Brown’s signature blend of contemporary and African dance styles was embraced by the company. They understood how to deliver each movement. There were subtle gestures, lingering leaps, far off gazes and contrapuntal rhythms, which Brown handles so well.

The work is driven by the group’s pulse, especially the intermittent fast-paced skips (alternating knee lifts with arm swings) that take them across the stage, but individuals are highlighted in multiple solos.

Throughout the evening, the infectious Daile Carrazana Gonzalez and Manuel Duran Calzaso stood out, but in Brown’s work, the way they easily glide through movement after movement was delicious. Bravo, MalPaso!