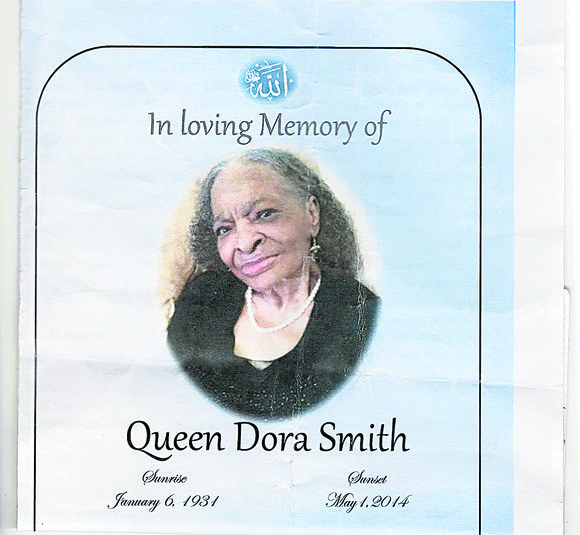 A legion of admirers, friends and relatives paid their respects during the going home services conducted for Sister Dora Smith on Thursday, May 8 at Dekalb Funeral Services in Bedford-Stuyvesant, Brooklyn. She made her transition on May 1 at 83 years of age.

Her parents, Rumlee and Christine Spencer, named her Dora Spencer after she was born on Jan. 6, 1931, in Engelhard, N.C. As a youth, Smith, her mother and her sister, Mattie Lee, relocated to Bed-Stuy, where she remained for a few years before moving to Central Harlem during the early 1950s.

Shortly thereafter, she met and married Brother Clarence Edward Smith and bore four children: Clarence, Perry, Christine and Deborah. While her husband was serving a tour of duty in the Korean War in the mid-1950s, Smith witnessed Malcolm X speaking in the streets of Harlem and was enticed to join the Nation of Islam’s Temple No. 7, then located on the southwest corner of 116th Street and Lenox Avenue. She then became a devout Muslim, following the teachings of the honorable Elijah Muhammad.

Upon her husband’s discharge from the military in 1957, Smith and her mother introduced him to the Nation of Islam’s teachings, whereupon he soon joined Temple No. 7 in 1960. Three years later, he departed from the Nation of Islam and continued teaching the local youth as he established the Five Percenters, while Dora Smith remained behind, adhering to the Nation of Islam’s doctrine, even after her husband’s June 13, 1969, assassination in her building’s elevator at 21 W. 112th St. at the Stephen Foster Houses (now known as Martin Luther King Jr. Towers).

As she continued on, raising her children, Smith held various jobs throughout her life, including being employed at Harlem Hospital, providing outreach services for 15 years and as a kindergarten teacher who assisted in nourishing and guiding the minds and characters of the younger generation. She eventually moved back to Brooklyn, where she lived for the remainder of her physical life.

Special acknowledgement was made for her grandson Treval Shamel Smith and her daughter-in-law Shakisha Smith, who cared for her during her last years. Mention was also made of her being “a strong sister in Islam, a woman of integrity, honesty and unconditional love, who was a pillar of strength, love and respect. She will forever be known as a trusting and loving women with an unbreakable foundation.”

Smith is survived by her sister, Mattie Lee; sons Clarence, Perry and Black Prince Allah; and numerous grandchildren, nephews, nieces, cousins and other relatives and friends.