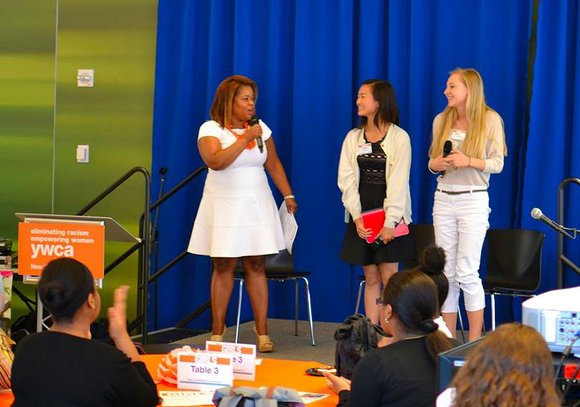 The nation-wide organization’s New York City branch facilitated the gathering of 200 girls and women leaders from diverse backgrounds to discuss ways to amplify the voice of girls amongst those of women. The conference aimed to encourage and ensure that the girls, aged 14-18, from all over the city recognize their potential and are able to act on it by creating a network of women and organizations to assist them in their growth.

Kim Keating talks to CEO Dr. Danielle Moss Lee and her daughter at the Potential to Power Girls Symposium.

Author of Orange is the New Black Piper Kerman talks to high school students during the roundtable discussions.

“We are asking girls and organizations that work with girls to step boldly into ‘now.’ Potential speaks to who they might become - it is a possibility, not a guarantee,” said Danielle Moss Lee, CEO of the YWCA of New York City. “I want the girls who come together at this event - many of whom would not normally come into contact with each other - to co-create a movement for girls in New York City that ensures that they are emotionally and physically safe to grow completely unencumbered by the specter of gender inequality and misogyny.”

Accomplished women from across the nation were expected to attend, including NYC Public Advocate Leticia James, Reshma Saujani, the founder of Girls Who Code, U.S Representative Yvette D. Clarke, Alia Jones-Harvey, the only woman of color currently working as a leading producer on Broadway and Bronx district Council Member Annabel Palma. 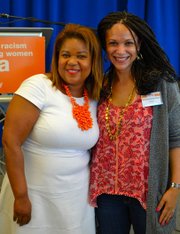 Lee reveals that she is grateful for these women who are making it a priority to stand with girls and remind them that their voices will be heard.

“We hear them now - not in some undefined future moment when society deems they are old enough to be validated. Whatever school they attend, whatever community they live in, no matter their socio-economic status - our girls are power now,” she said.

YWCA, an organization dedicated to eliminating racism, empowering women and promoting peace, justice, freedom and dignity for all, hopes that their first annual girls symposium will help to promote the creation of a strong network of influential women and organizations that can inspire young women across the nation to value themselves and their abilities as they grow.

“We are saying to girls in New York City, you are valid now, you matter now, and you have power now - in essence, you are power… not potential,” said Lee.