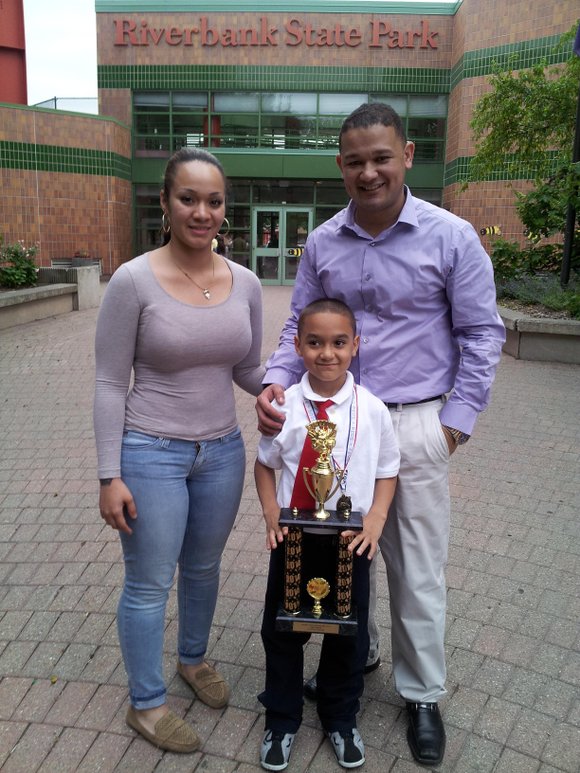 Amid bumblebees pasted on the walls and the cheers of dozens of proud parents, students from schools all throughout Harlem’s District 5 competed in the first ever superintendent’s spelling bee, held at Riverbank State Park last week.

The two-day event allowed students in grades one through five to compete on day one and those in grades six through eight to compete on day two. Community School District 5 Superintendent Gale Reeves stressed the importance of academic competitions such as the bee for Harlem students of all ages.

“Though abbreviated spelling through text and email communication are rampant in our children’s lives, spelling among academic and professional forums is still necessary,” said Reeves. “Students need to be able to meet the challenge of future career and academic goals, being well-equipped in their reading, writing and spelling abilities.”

The students in District 5 who took part in the competition June 4 and June 6 began preparations in early May, competing in individual school spelling bees to determine which students would be sent to the district-wide event. The committee responsible for hosting the event revealed that the bee, which will become an annual event, is a great way for students to engage in challenging, but friendly, academic competitions while also improving their oratorical skills and overall confidence.

All student participants received a gold medal, and the first, second and third place winners were awarded trophies. The very first winner of the bee was first grader Corey Cid from P.S. 36. “[I’m] very excited, very happy, very proud, filled with joy, but [we] worked very hard so I’m not surprised,” said his mom, Jennifer Martinez. She, like several other parents who attended the bee, was grateful that a Harlem school district recognized the need for academic competitions such as spelling bees for children in local school districts.

Janet Stewart, the teacher of third grade winner Kadiatu Bah from P.S. 200, helped to inspire her students and revealed how excited they were to learn that they would have an opportunity to compete in a spelling bee. “When they mentioned [having a bee] to my school, I let [my students] watch ‘Akeelah and the Bee,’ so they were very motivated,” she said. “Even those students who are not [the best] spellers, after watching that, they wanted to be in it.”

She expressed hope at the news that the bee is only the first in what will become an annual event. “I do hope they keep it up,” she said. “I’m just wondering what took them so long to realize that there are so many different talents in the schools.”

Reeves remains optimistic that future winners will be able to participate in the Scripps National Spelling Bee, and this does not appear to be far-fetched, as students as young as 6 years old revealed that they are willing to work hard to prepare. Second grade runner-up Brian Cespedes, from Thurgood Marshall Lower Academy, explained that he studied with his friends, family and teacher during the week leading up to the bee.