Jumaane Williams: ‘Not in my hood’ 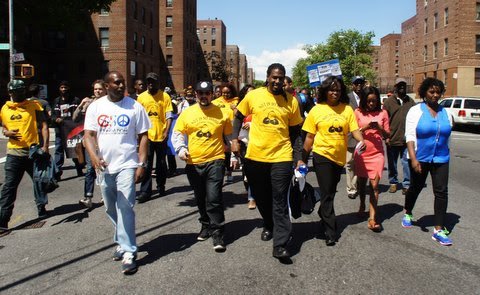 As the summer begins, many city leaders and community activists have begun to prepare for the violence that has unfortunately become routine with the warmer weather.

In the middle of his second term in office, Brooklyn City Council Member Jumaane Williams, who represents the 45th Council District in Brooklyn, has been at the forefront of the fight to put the cap on violence.

While he is concerned about violence across the city, he is particularly concerned about the increase in shootings in Brooklyn, where his district is located, and other hot zones like the Bronx.

During the final weekend of May alone, 13 people were wounded in nine different shooting incidents across the city. Incidents included the shootings of three teenagers.

Williams serves as deputy leader and co-chair of the Council’s Task Force to Combat Gun Violence. His crusade has included declaring June “Gun Violence Awareness Month,” openly condemning violence in the community and hosting a march and resource fair.

“We are at a critical juncture in the city and as a nation, and generations are going to look back and say, ‘What the hell are we doing?’” Williams said in a recent interview with the AmNews. “We have the worst gun violence problem because people in the country have more access to these weapons.”

While Williams believes there is a need for police, he thinks that just sending police into the community is not the only solution. According to Williams, instead of more officers, which could result in mistreatment, resources are what’s really needed.

The march, emceed by Gangstas Making Astronomical Community Changes’ Shanduke McPhatter, led more than 200 community members and advocates through East Flatbush to raise awareness of anti-gun violence initiatives and to bring an end to senseless violence throughout the community.

A resource fair at I.S. 285 Meyer Levin Junior High School was designed as an educational opportunity and included free access to legal services and opportunities for young people to take advantage of educational and employment resources, as well as after-school and summer activities.

“We are trying to raise awareness that everyone has a part to play,” he said. “Government and individuals have a part to play. There are people who care about the people who are dying. The march itself is not going to help solve the problem, but what happens between the marches.”

However, the part that individuals have to play, he says, is getting rid of a culture where people are not willing to speak up about what’s going on.

“As a community, we have to deal with this ‘no snitching’ notion,” Willliams said. “Our community is confused on what snitching is. We have to recognize gun violence as a public health issue.”