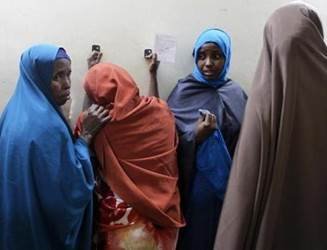 Jun. 23 (GIN) – As part of a controversial anti-terrorism operation, Kenya is rounding up and detaining Somali refugees, migrants and asylum-seekers, separating parents from young children.

Some of the children are said to be confined to a Nairobi stadium without a parent or guardian.

Emanuel Nyabera, spokesman for the U.N. Refugee Agency, expressed concern for some 300 children of the Somalis, including babies as young as a few months.

Kenya began its massive round-up after a blast that killed six people on March 31 in a mostly Somali area of eastern Nairobi. Under Operation Usalama (Peace), Kenyan security forces have stormed homes in the capital, detaining thousands of Somali refugees and Somali Kenyans.

Kenya is home to about 2.4 million citizens of Somali origin, as well as hundreds of thousands of Somali refugees. The country's decision to send troops to Somalia in 2011 triggered retaliatory attacks by al-Shabab, whose fighters last year stormed an upscale mall in Nairobi and killed 67 people.

Many Somali Kenyans fear the crackdown could be a prelude to a wider government-led "strategy of tension" that could lead to their denationalization.

On Monday, Kenyan fighter jets bombed the Somali villages of Anole and Kuday in an effort to “liberate” Somalia from al-Shabab, according to the African Union (AU) force in Somalia.

Up to 80 militants were killed in the attack. Kenyan troops are part of the 22,000-strong AU force battling al-Shabab. The militants dispute the figure.

Last week, Al Shabab launched a deadly raid on the Kenyan coastal town of Mpeketoni, saying such attacks were in response to the presence of Kenyan troops in Somalia.

Kenya’s political leaders, meanwhile, are feuding over the mission of the Kenyan Defense Force (KDF). Opposition leader Raila Odinga has called for troops to be withdrawn because of the threat of retaliatory attacks. But President Uhuru Kenyatta, who came to power while KDF was already in the trenches in Somalia, insists that KDF's mission in Somalia will go on and that the deadly attacks at home would not make the Government to flinch and recall the soldiers.

Economically, billions of shillings have been spent in the war effort while, socially, many families of soldiers are still in tears after losing their loved ones.