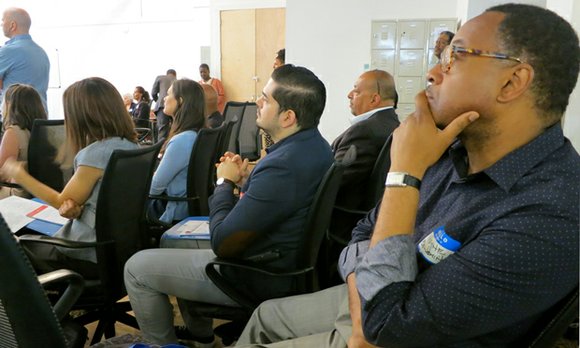 Tech has a diversity problem. Yahoo’s demographic data points to a workforce lacking in diversity: 4 percent Hispanic and 2 percent black in a release from last week. “Blacks and Latinos tend to think of tech as a big monster that we can’t be part of,” said Kathryn Finney, founder of Harlem-based social enterprise company Digital Undivided.

Finney and others hope to fight the problem by making tech jobs part of the economic development agenda in Harlem, the part of Manhattan with the largest black and Latino population. Last Saturday, 100 people streamed into the Harlem Garage’s open, brick-walled co-working space for the Central Harlem Technology Forum. The forum brought together educators, innovators, entrepreneurs, and community members to meet, share their projects and think about the future of technology and entrepreneurship in Harlem.

An upcoming 95-block outdoor wi-fi network, to run from 110th Street to 138th Street between Frederick Douglass Boulevard and Madison Avenue, and a proposed gigabit internet backbone project, more than 25 times the current average connection speed in New York City, from Silicon Harlem are two examples of collaborative technology infrastructure projects that could change Harlem. Startup incubators like Harlem Biospace and economic development organizations like Harlem Business Alliance and Harlem Community Development Corporation are already providing opportunities and support for the business and tech communities in Harlem. “No other community is putting this type of effort in,” said Manhattan Borough President Gale Brewer in her remarks to the crowd.

Guests dressed in t-shirts and jeans mingled with those wearing suits. Melba’s, a restaurant and catering company based just a few blocks away on West 114th Street, served eggs, fried cod and grits. That mix of tech people, civic organizers, and local food is just a small representation of the variety of Harlem entrepreneurship, and it was just what the members of Manhattan Community Board 10 Economic Development Committee hoped for in supporting the event. “We spread the word,” said Henrietta Lyle, Chairperson of Community Board 10. “We can be involved with connecting business, education, and technology.”

The event space itself is part of the uptown tech trend. Harlem Garage, one of eight co-working spaces operated by MicroOffice in New York City and Chicago, opened in 2013 on 118th between Frederick Douglass Boulevard and Manhattan Avenue.

As part of a long day of campaigning, Congressman Charles Rangel stopped by and spoke about the importance of access to technology and of community boards.

The representatives from local economic development organizations seemed encouraging about the opportunities for tech in Harlem. Harlem Business Alliance Executive Director Regina Smith spoke to the benefits of Silicon Harlem’s tech project, “If you have the speed, companies have to locate here.”

Yvahn Martin, an organizer of the Harlem co-working Meetup group, was a presenter and audience member at the tech forum. Over her eight years in the area, Martin has seen the Harlem entrepreneurial scene involve media companies, high-tech, education, the arts, and public relations. It’s also created jobs. “In the meetup group I’ve heard of a lot of people hiring each other as subcontractors,” said Martin.

Jason Ohene, a relationship manager at the Spring Bank community bank, summed up the optimism behind the inclusiveness and economic development, “You never know who’s going to be the next Bill Gates.”