Juneteenth: We are our own liberators! Giving Black troops their real due 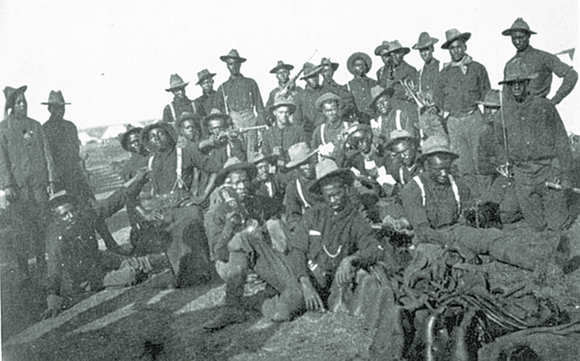 Buffalo Soldiers in the Spanish-American War

Neither Abraham Lincoln’s Emancipation Proclamation on Jan. 1, 1863, nor Gen. Gordon Granger’s reading of the Emancipation Proclamation to the enslaved Africans in Galveston, Texas, on June 19, 1865 (Juneteenth), freed us from slavery. It was enslaved Africans and so-called “free” Africans, who answered the call of Frederick Douglass and picked up arms, joined the Union Army and went from plantation to plantation, courageously and successfully engaging in armed struggle against their European enslavers and the Confederate Army, freeing their enslaved brothers and sisters.

Well over 180,000 Africans answered the call. Their story must be told. This story is well documented in Dr. Maulana Karenga’s book “Introduction to Black Studies” and Noah Andre Trudeau’s book “Like Men of War: Black Troops in the Civil War 1862-1865.” We are our own liberators! The two biggest historical lies perpetuated worldwide are that Christopher Columbus discovered America and Lincoln freed the slaves. This article will deal with Lincoln.

W.E.B. DuBois, in his 1935 essay titled “The Propaganda of History,” stated, “The North was ashamed because it had to call in Black men to save the Union, abolish slavery and establish democracy.” Now, we know democracy was never established, but chattel slavery was abolished, and Black men were the vital force in that accomplishment. DuBois further stated, “The decisive action which ended the Civil War was the emancipation and arming of the Black slave.” DuBois even quotes the racist Lincoln, who said, “Without the military help of Black freed men, the war against the South could not have been won.”

Lincoln was clear that it was the Black soldiers, not his Emancipation Proclamation, who won the war and freed the enslaved Africans. The Emancipation Proclamation declared freedom for those enslaved Africans in the slave states that left the Union in rebellion. Therefore, he had no jurisdiction over them because they left the Union and formed the Confederacy and their president was Jefferson Davis.

Lincoln said that the Proclamation did not apply to the few slave states that stayed with the Union (i.e., Missouri, Kentucky, Maryland and Delaware), so they had permission from Lincoln to continue slavery. So who did Lincoln’s Proclamation really free? No one! Lerone Bennett Jr. makes this case excellently in his book “Forced Into Glory: Abraham Lincoln’s White Dream.”

We celebrate Juneteenth as opposed to the fourth of July. Here’s what Douglass had to say in a speech on July 5, 1852, about the Fourth of July, America’s Independence Day: “What, to the American slave, is your Fourth of July? I answer, a day that reveals to him, more than all other days in the year, the gross injustice and cruelty to which he is the constant victim.

“To him, your celebration is a sham; your boasted liberty, an unholy license; your national greatness, swelling vanity; your sounds of rejoicing are empty and heartless ... with all your religious parade and solemnity, are, to him, mere bombast, fraud, deception, impiety, and hypocrisy—a thin veil to cover up crimes which would disgrace a nation of savages.

“There is not a nation on the earth guilty of practices more shocking and bloody than are the people of the United States, at this very hour,” Douglass further stated. “This Fourth of July is yours, not mine. You may rejoice, I must mourn.”

I stretched the Douglass quote because it is so powerful. Everyone should read it in its entirety.

We must never forget that Harriet Tubman’s Underground Railroad led us to freedom. Nat Turner’s insurrection was a bold revolt at securing our freedom. Gabriel Prosser’s and Denmark Vessey’s plans of insurrection were awesome. So as we celebrate Juneteenth, the truth must be told. Enslaved Africans in Galveston were not sitting around ignorant and docile for over two years waiting for Granger of the Union Army to come by on June 19, 1865, and read the Proclamation to them. This doesn’t make sense, especially because the Emancipation Proclamation never freed them.

Also, the enslaved Africans of Galveston were not the last Africans to be freed. Slavery existed in other states and territories after June 19, 1865. The 13th Amendment that abolished slavery, except as a punishment for a crime, was ratified in December of 1865 six months later. Most importantly, every Juneteenth celebration should tell the story of the heroism and blood spilled by our true liberators, the Black soldiers of the Civil War, not Abraham Lincoln.