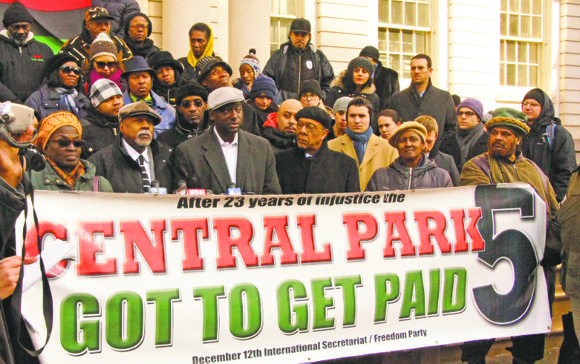 At last! The Central Park Five men are about to get paid.

The Amsterdam News has just learnt that Scott Springer, New York City Comptroller, has officially signed off on a settlement of 40 million dollars to the five men who were wrongly accused of brutally beating and raping a woman in Central Park in 1989.

Stringer told the AmNews, “I am announcing today that I have approved the proposed settlement in the Central Park Five case (McCray et al. v. City of New York et al., 03-Civ. -9685, 03-Civ.-9974, 03-Civ.-10080 (DAB) (S.D.N.Y.). In my judgment, this settlement is a prudent and equitable solution for all parties to the lawsuit and closes a very difficult chapter in our City’s history. I would like to commend New York City’s Law Department for their extensive efforts in reaching this settlement. “

Meili, who was a regular jogger at Central Park, was found in a brush with a startling amount of blood drained from her body and a smashed skull. She was in a coma for weeks and has permanent physical damage with little to no memory of the attack.

The attack gained nation-wide attention and served as a prime example of New York City’s race and class prejudice. It also gave rise to the slang term "wilding" for urban teenagers.

There have been years of rallies and protests to exonerate the young men, and then to get them their compensation.

Each of the five young men served six to 13 years in prison after being forced to confess by an NYPD under public pressure to solve the case, say attorneys for the five – thus they ignored or buried key evidence.

However in 2002, new evidence was found that linked the crime to Matias Reyes, serial rapist who confessed he attacked Meili alone. The DNA evidence supported his confession. The five innocent men were then released from prison.

While, a judge still has sign off on the settlement, according to a highly-placed source in the case the young men “are extremely happy and just want to get on with their lives.”

There will be a press conference at City Hall at 11am tomorrow – Friday 27, June.