The Search for the Nigerian Girls Continues 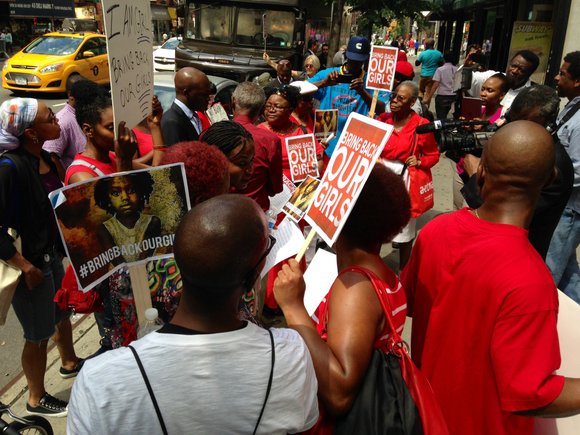 Nigerians and Americans of all ages stood in front of the Nigeria house in Manhattan with signs that said 'Bring Back Our Girls" and "Freedom Now for Kidnapped #NigerianGirls."

The rally focused on the crisis concerning the schoolgirls in Chibok who were kidnapped in mid-April by the extremist-Islamic group, Boko Haram. It has been over ten weeks since this incident occurred and the girls still remain missing.

"These people [Boko Haram] are criminals." explained Comfort B. Asanbe. "They bomb schools, they bomb churches, they are just criminals. They took the girls because they know they can get attention. What the country has descended into is so disheartening for those of us who were born and raised there."

Bukola Oreofe, Director of the Nigerian Democratic Liberty Forum, speaking to the protestors

The names of the missing schoolgirls were called out and a speech was conducted by Bukola Oreofe- Director of the Nigerian Democratic Liberty Forum- who was visibly angered by the duration of the girls' disappearance.

"Nigeria has a government that spends billions of dollars on security and they have nothing to show for it." Oreofe announced. "Step up or step down!"

Nigerian President Goodluck Jonathan has been criticized for his slow response to the kidnappings. He stated in his op-ed piece in the Washington Post that his silence is required to keep these girls safe but is working with the Nigerian government to punish Boko Haram for their actions. Nigerians remain skeptical about his words.

"I can assure you, these girls are crying and calling on us to help. " Oreofe went on to say, "so we have to call on the international community to disregard whatever Jonathan is doing and rescue these girls."

Boko Haram remains active. On Sunday, they were suspected of attacking people living in Katukari, a village near Chibok. The group plans to eliminate Christians from the country and creating an Islamic state.