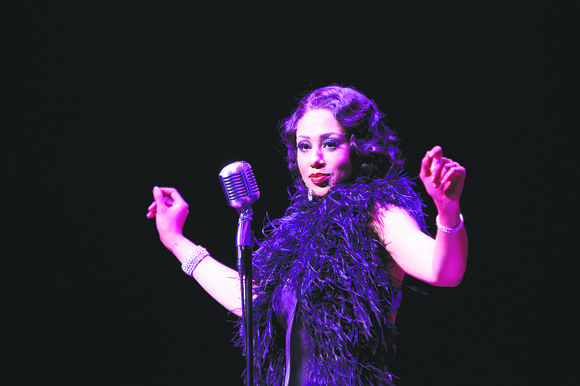 Margot B. performs during the Apollo’s “Club Harlem”

In just the second iteration of the Apollo’s “Club Harlem,” begun last year as an idea by Executive Producer Miki Shepard, number two was a hit.

Walking up to the marquee at the Apollo, folks were decked out in white ties and tails with bling all around. Inside the theater space, “Club Harlem” was in full swing with low lights, tiny tables, a few seats and pianist Isaac Ben Ayala setting the mood. He was soon joined by the Apollo “Club Harlem” Orchestra seamlessly playing tunes by Duke Ellington.

Then it was time for the Apollo Hot Steppers. In high heels and glitzy costumes were the showgirls Aqura Lacey, Jennifer Locke, Tera-Lee Pollin and Hollie E. Wright. Alongside them were the sharply dressed male dancers Slim Mello, Major Nesby, Alvon Reed and Jaquez Andre Sims, dancing to Ellington’s “Crescendo in Blue.”

The host, and decidedly the most effervescent entertainer, Maurice Hines joined the dancers and began an evening of great dancing and good music that seemed to belong to Harlem.

In between singing “Drop Me Off in Harlem,” Hines confirmed, “I’m so happy to be back here. There is always fabulous talent.”

Hines’ high energy endorsed the tone of the evening, and the audience responded in kind. Among the many showstoppers were Hines’ rendition of Cab Calloway’s “Minnie the Moocher,” where the audience didn’t hesitate to respond to Hines’ prompts, “Hidee hidee hide hi” and “Hode hode hode ho.” Hines drew even more of a cry from the audience in his tap dance to Ellington’s “It Don’t Mean a Thing.”

A modern take on the hip and cool “Club Harlem” was the addition of tap dancer duo the Manzari Brothers (John and Leo) and hip-hop dancers the Wondertwins (Billy and Bobby McClain). Apollo memories were stirred when the showgirls took the stage in banana skirts recalling Josephine Baker and when men pumped out a fast-paced mambo recalling Celia Cruz, both Apollo legends.

Hines punctuated the evening here and there with stories and memories of his own. “It’s lonely without my brother [Gregory Hines], but it’s special to be at the Apollo. I’m having such a good time,” he said.

Rounding out the evening was crooner Margo B. of “Boardwalk Empire” and Kevin Mahogany, whose singing style is likened to that of Joe Williams. What a night!