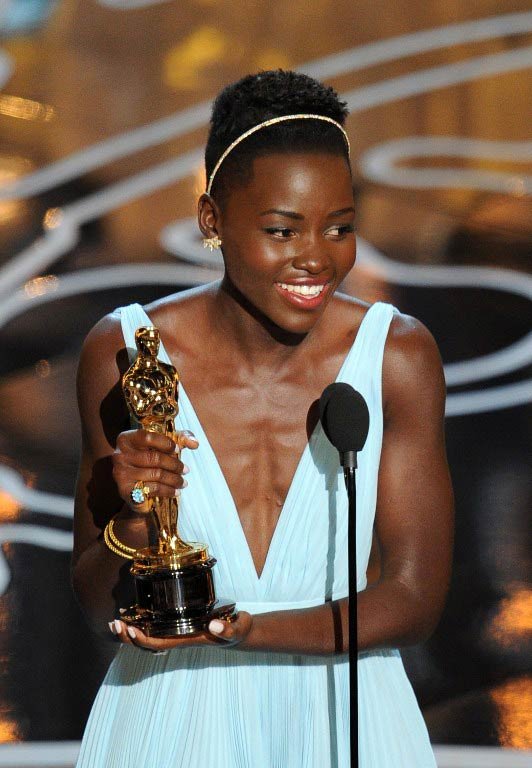 The chatter on social media sites was off the charts as the Oscar choice for Best Supporting Actress was named, with the luminescent Lupita Nyong’o winning for her role in the Hollywood feature “12 Years a Slave.”

Nigerian journalist Bim Adewunmi, writing in The Guardian, was one of many Africans covering the long night of prizes and accolades. She would witness Nyong’o at the moment of her victory and feel the chills of the much-deserved award.

Adewunmi recalled the moment: “She never had that look of being cowed or over-awed by all the pomp and pageantry. Dazzled, sure (who wouldn’t be?), but never looking out of place with it. There was always a confidence, borne out by her wonderful and gracious acceptance speeches and interviews.

“It helps that she looks beautiful too, with her super-short hair (a fade! On a Black woman! On the red carpet!) and dark brown skin, but even that beauty seems independent of the circus around her.”

At an earlier event, the Essence Black Women in Hollywood luncheon, Nyong’o said: “I remember a time when I too felt unbeautiful. I put on the TV and only saw pale skin. I got teased and taunted about my night-shaded skin. And my one prayer to God, the miracle worker, was that I would wake up lighter-skinned.”

On the Kenyan blogs, the chatter took a turn to the personal. “Dear African women and your daughters, LOOK! No weave on Lupita’s head,” penned noted Kenyan writer Binyavanga Wainaina.

The Kenyan actress and Yale School of Drama graduate, who turned 31 on Saturday, won plaudits for both her efforts on screen and her impeccable fashion sense.

Meanwhile, on the blog site bellanaija.com, breathless accolades poured out: “I am sooooo proud, you’ve given us hope,” “Dreams come true … wish her all the best in her future endeavors,” and “I usually don’t care for things like these, but dang Lupita’s speech brought tears to my eyes! She’s all types of adorable!! More grease to her elbows and I hope she stays grounded too!”

“Lupita Nyong’o has arrived,” declared Adewunmi. “And while most of us seem glad of it, some of us are inevitably more glad than others.”