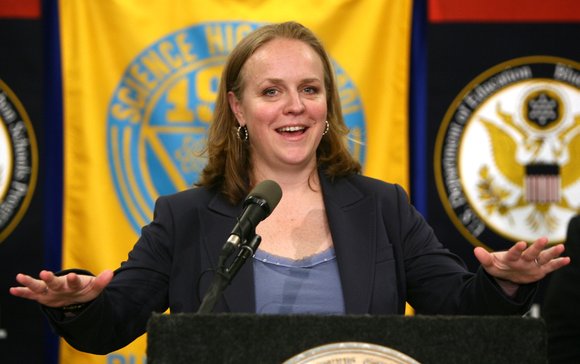 The relationship between Newark Schools Superintendent Cami Anderson and the school advisory board has become so confrontational that they now communicate by press release and video.

Anderson said she would no longer attend the advisory board’s monthly meetings because they “are no longer focused on achieving educational outcomes for children.”

Anderson is being attacked on all sides as she tries to take her “One Newark” plan to the next level. Anderson plans to lay off more than 1,000 teachers in the financially strapped district. She wants to close more public schools and expand the charter school sector, which already serves 20 percent of Newark’s children.

If her plan is approved by the state Department of Education, Anderson would upend longstanding “first in, last out” rules governing teacher layoffs.

Marques-Aquil Lewis, vice chairman of the advisory board, called on the board to publicly counter the superintendent’s refusal to attend future meetings. He wants a federal investigation on the One Newark plan.

“I think we need to respond as soon as possible,” Lewis said in a statement. “We could have the press conference in her office. ... I’m tired of the disrespect. I am tired of her continuing to disrespect us.”

A spokesman for Anderson said the superintendent has stated that she will return to the monthly public meetings when the advisory board can ensure “a space conducive to open dialogue with the community.”