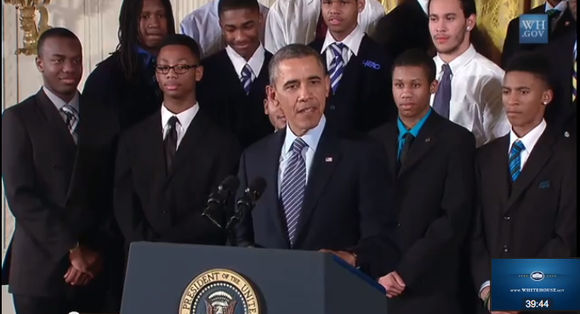 President Barack Obama may dither about what to do about the crisis in the Ukraine, but here at home, particularly for those of his race waiting for him to show some preferential treatment, his “My Brother’s Keeper” initiative is promising.

“After months of conversation with a wide range of people,” the president said last Thursday at the White House, “we’ve pulled together private philanthropies and businesses, mayors, state and local leaders, faith leaders, nonprofits, all who are committed to creating more pathways to success, and we’re committed to building on what works. And we call it ‘My Brother’s Keeper.’”

He added that the initiative was by no means new and not “some big government program. In my State of the Union address, I outlined the work that needs to be done for broad-base economic growth, the manufacturing hubs, infrastructure spending.” However, he gave little indication that any part of that initiative would be earmarked for young African-American men.

For many Americans, this was a stunning announcement, and even more astonishing for his confessional, which may have gone a bit too far. Surrounded by several young Black boys, Obama told them that he didn’t always do the right thing. “I didn’t have a dad in the house, and I was angry about it, even though I didn’t necessarily realize at the time. I made bad choices. I got high without always thinking about the harm that it could do. I didn’t always take school as seriously as I should have. I made excuses. Sometimes I sold myself short.”

Obviously, he wasn’t asking the young men to make the mistakes he made, but if they have, then there’s still time for them to get on the right track, as he did, and make a contribution to society.

To get those in need on the right track, he said he was pleased to announce that “some of the most forward-looking foundations in America are looking to invest at least $200 million over the next five years, on top of the $150 million that they have already invested, to test which strategies are working for our kids and expand them in cities across the country.”

Almost immediately, there were those who said that was hardly enough money to make a dent in a deep systematic problem. Moreover, what about the young Black women in need of help?

Obama may have anticipated that concern when he stressed the pressing need to take care of young Black males. “We know boys who grow up without a father are more likely to be poor, and as a Black student, you are less likely to read as proficiently in the fourth grade,” he said. “By the time you reach high school, you are far more likely to have been suspended or expelled. There’s a higher chance you end up in the criminal justice system and a far higher chance that you are the victim of a violent crime. Fewer Black and Latino men participate in the labor force, compared to young white men. And all of this translates into higher unemployment rates and poverty rates as adults.”

The unemployment and the incarceration rates of young Black men were key points in Rep. Charles Rangel’s endorsement of the measure. “I am honored to be invited by President Obama to the White House to support his launch of ‘My Brother’s Keeper,’ a new initiative to help every boy and young man of color who is willing to do the hard work to get ahead. Growing up in the streets of Harlem, I was able to go to law school with the help of the G.I. Bill and great mentors in the community. I know firsthand the value of providing opportunities to those who may not have adequate resources to begin with,” he said in a press statement.

During his announcement, Obama observed that Bill O’Reilly and the Rev. Al Sharpton were among those in attendance, and he made a point of saying their attendance despite their often differing opinions was a possible indication of the success of his initiative.

At the close of his remarks, the president offered a more sweeping concern: “We need to give every child—no matter what they look like, where they live—a chance to reach their full potential, because if we do, if we help these wonderful young men become better husbands and fathers and well-educated hardworking good citizens, then not only will they contribute to the growth and prosperity of this country, but they will pass the lessons on to their children, on to their grandchildren. We’ll start a different cycle, and this country will be richer and stronger for it for generations to come. So let’s get going.”