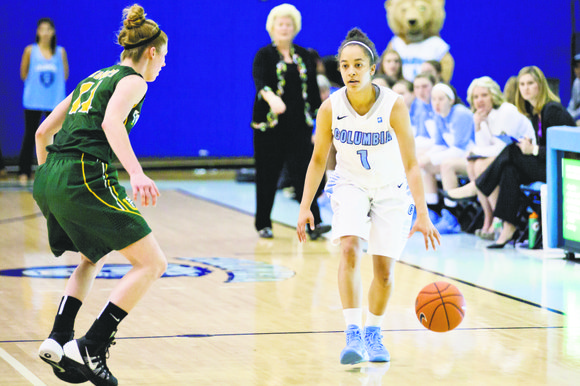 Taylor Ward has a lot of game going for her, but the Columbia point guard wants to be a coach Columbia Athletics photo

Columbia University point guard Taylor Ward posted 16 points in the final game of her collegiate career, a loss to the Princeton Tigers. While the Columbia Lions finished the season 6-22 overall, 3-11 in Ivy League conference play, Ward is headed to the Final Four to participate in the Women’s Basketball Coaches Association’s (WBCA) “So You Want to Be a Coach” program.

In its 12th year, the program is an intensive three-day workshop held in conjunction with the WBCA’s national convention, which takes place in Nashville, Tenn., the site of the Women’s Final Four. Chosen from hundreds of applicants, a select group of players will learn about the skills necessary to enter the coaching profession.

She learned about the program from former teammate Jazmin Fuller, who participated in the program, and from coach Stephanie Glance, who has also taken part in the presentations. Ward said she’s interested in meeting her fellow aspiring coaches, among them Haley D’Angelo of Iona College. She’s also eager to ask the coaches about the paths they took in their careers.

Participants get to attend the semi-final games at the Final Four, and Ward hopes Louisville is there because she played against guards Shoni and Jude Schimmel in high school.

The Columbia Lions didn’t win a lot of games during Ward’s college career, but this season under Glance has been inspiring.

“I haven’t felt like it’s been about wins and losses. I felt it’s been about growing not only as a player, but as an individual,” said Ward. “What I want to bring to coaching is that the players I coach give their best. One of the biggest things I talk about when I talk about coaching is playing for the little girl that fell in love with the game.

“That’s what this season has been about for me—having fun and playing my hardest.”