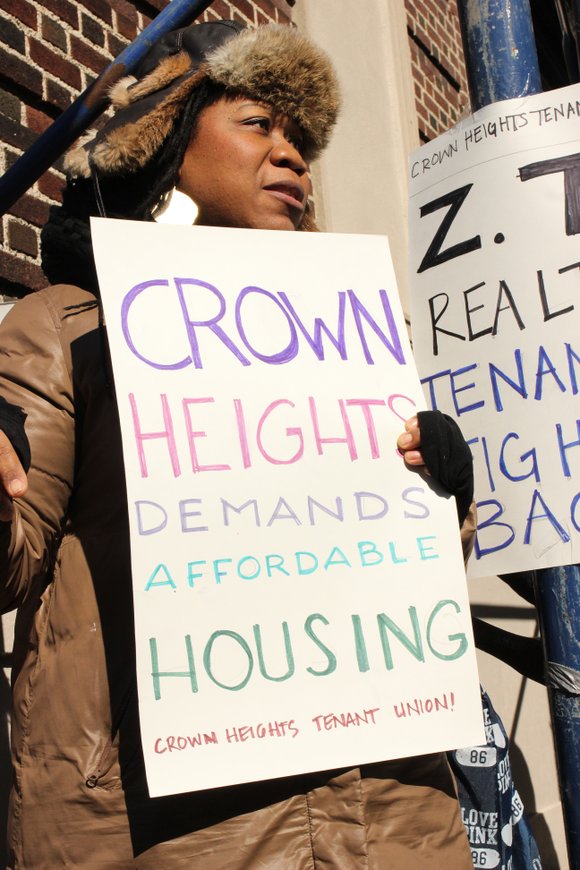 One group of residents is determined to do their part to protect against the “extreme gentrification” they say is happening in their community of Crown Heights, Brooklyn.

The Crown Heights Tenant Union is a group of residents from 25 local buildings, who recently had their official launch in front of 1059 Union St. They have been meeting since October of last year and trying to fight against gentrification and unfair conditions perpetuated by greedy landlords, according to their press release.

“Anyone in the neighborhood can join and then represent their building,” Organizer Manissa Maharawal said in an email to the AmNews. “[The union] aims to build coalitions... with the idea that we are more powerful together and that landlords will listen to us better if we are working together.”

Members of Crown Heights Tenant Union gather in front of 1059 Union St. during a rally for better treatment and affordable housing from landlords.

According to the group’s press release, landlords like BCB Properties purposely buy rent-stabilized property in the neighborhood and buy-out longtime residents in order to create luxury properties and raise rents.

“We’re living here and paying our rent while our landlord refuses to make repairs,” said neighborhood resident Joan Golding via press release. “They only care about money.”

According to an email from Cea Weaver, Assistant Director of Organizing and Policy for the Urban Homesteading Assistance Board, BCB Properties has contacted both tenants and the New York City Department of Housing Preservation and Development to address the concerns raised. Attempts to reach out to BCB Properties by AmNews were not answered.

A post on the Crown Heights Tenant Union Facebook page states that members, “are fighting to keep Crown Heights affordable.” One of the demands listed by the union is a five-year rent freeze. If the demands are adopted by landlords of union member buildings, landlords would not be able to raise rent rates for neither rent-stabilized nor non-stabilized buildings for five years.

With rental rates seeming to escalate in the city with each passing year, that could be a very good thing. According to Real Impact Real Estate’s Brooklyn Rental Market report, the average rent in Crown Heights has increased almost 10 percent over the last year.