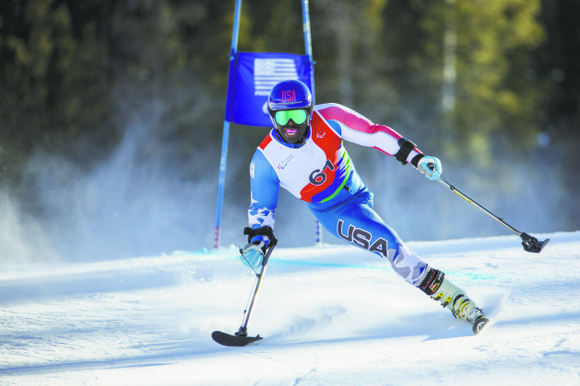 “I consider myself to be an ambassador of this sport,” said Ralph Green, 36, who competed in alpine skiing at the Paralympic Winter Games in Sochi, Russia, last week. “You have great camaraderie amongst competitors. Whenever you’re able to do something that an able-bodied person can do and do it better than an able-bodied person can do it, you have a different perspective on things that you can achieve.”

Growing up in Bedford-Stuyvesant, Brooklyn, Green, was an athlete in multiple sports. At 16, he was the victim of a random street shooting that resulted in his left leg being amputated at the hip. He graduated from Boys and Girls High School in 1995 and moved forward with his life. In 2000, he discovered skiing, and it became his passion.

“When I put my [Team USA] jacket on, it isn’t about Ralph,” said Green, who previously competed at the Paralympic Winter Games in 2006 and 2010. “This is about what I can do for my nation. I am pushing myself to be the best that I can be on a hill.”

Since becoming a competitive ski racer, Green has lived and trained in Colorado, but he returns to Brooklyn to see family and to try to inspire kids in the neighborhood where he grew up. He is well equipped to talk about overcoming challenges to excelling in life.

Paralympic skiers in Sochi raced on the same courses that Olympic skiers did at the Olympic Winter Games in February. Green, who finished 18th in the slalom and 16th in the giant slalom, said racing those courses was the realization of a dream for many Paralympians.

“It was definitely a challenge,” said Green, who missed a gate and did not finish the super-G race. “This was something we’ve always wanted to do—run the same type of course as able-bodied skiers. I think we got a real good taste of that.”

He said the people of Sochi and the Paralympic volunteers were incredibly welcoming to all the athletes.

“To be able to look out the window and see the beautiful mountains at Rosa Khutor was definitely something special,” he said.