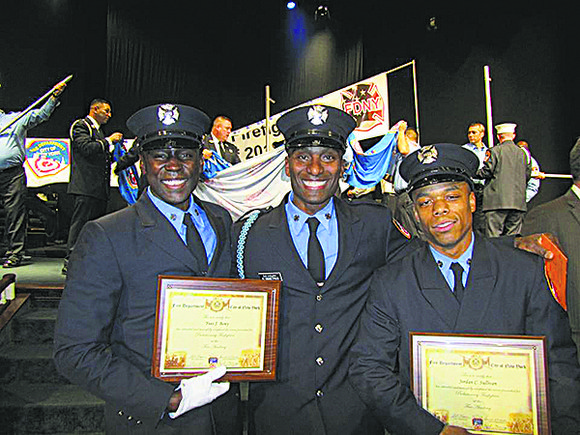 According to the Justice Department, “From 1999 to 2007, the FDNY used written examinations with discriminatory effects. These examinations unfairly excluded hundreds of qualified people of color from the opportunity to serve as New York City firefighters.”

Ending a legal battle hard-fought by the Michael Bloomberg regime, Mayor Bill de Blasio agreed to pay more than $98 million, including $6 million for lost medical benefits, to about 1,500 Black and Hispanic former FDNY applicants and current firefighters. Members of the Vulcan Society of Black firefighters and their attorneys held a press conference after the city’s announcement

“This is a great day in the city of New York,” said Capt. Paul Washington, a former president of the Vulcan Society and the firefighter who filed the original complaint. “And we hope that this is the beginning of a new day for the New York City Fire Department.”

De Blasio, who has yet to appoint a fire commissioner, and his corporation counsel, Zachary Carter, praised the settlement as a way to diversify the FDNY.

“The brave men and women of the FDNY work tirelessly to keep us safe from harm’s way. Our administration is committed to ensuring every New Yorker who seeks to take on this heroic role has a fair opportunity to join the ranks,” de Blasio said in a statement.

The city has also agreed to help increase the diversity of the FDNY. Some of the steps include creating an executive staff position of chief diversity and inclusion officer, who will report directly to the fire commissioner. In addition, the city will work with the Department of Education and New York City colleges to create educational and other opportunities for firefighters.

City officials say that appointing two officials to ensure that the FDNY increases diversity among its ranks is proving that the city is committed to forging a new era for the FDNY, which is long overdue.

Rep. Yvette D. Clarke initiated an investigation of hiring practices used by the Fire Department as a member of the New York City Council. She commended de Blasio and Vulcan Society President John Coombs for their efforts to reach an agreement that would not only compensate the victims, but also commit the Fire Department to a policy of inclusion.

“There existed a policy of massive resistance, by which qualified African-American and Latino applicants were almost entirely excluded from service in the New York Fire Department based on their race,” said Clarke. “As the representative in Congress of many of the men and women who were victims of the policy of exclusion, I will work to support the Vulcan Society to eradicate the effects of discrimination in the FDNY.”