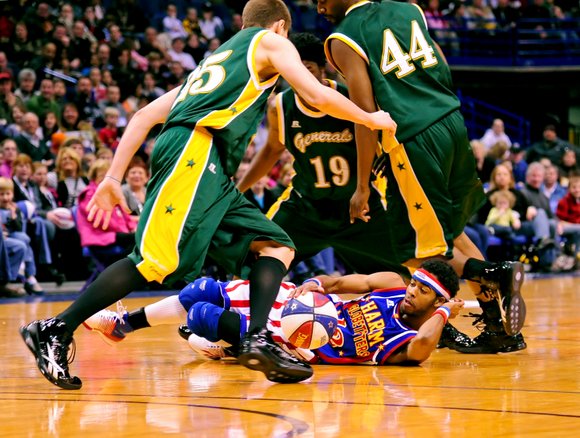 Promotional photo from the Harlem Globetrotters.

The Harlem Globetrotters’ fate is in the public’s hands. They’re letting their fans nationwide vote on a new rule in their “Fans Rule” World Tour. The rule with the most votes will become part of the game—the more fun it is the better!

“We had so much fun letting fans vote on rules to use in our games last year that we are doing it again,” said Senior Director of Publicity for the Globetrotters, Eric Nemeth. “It gives us a chance to interact with our fans before the game.”

These are the rules to choose from:

Make or Miss: There are only two players from each team on the court. In order for more players to join the game, the ones playing must score points. Every time the team misses a shot a player sits down.

Hot Hand Jersey: Each team will have a “Hot Hand Jersey,” that can be shared among the team’s players. Every time the person wearing the jersey scores, their team earns double the points.

6 on 5: This one is pretty self-explanatory. One team has six players and the other has five.

The Globetrotters have been entertaining the world since 1927. Families, and especially kids, are at the heart of everything we do,” senior director Nemeth said.” Every trick, every joke, every play is driven by our promise to amaze and entertain every family who comes to watch us live.”