Perhaps the greatest of the Black Fives: The Harlem Rens 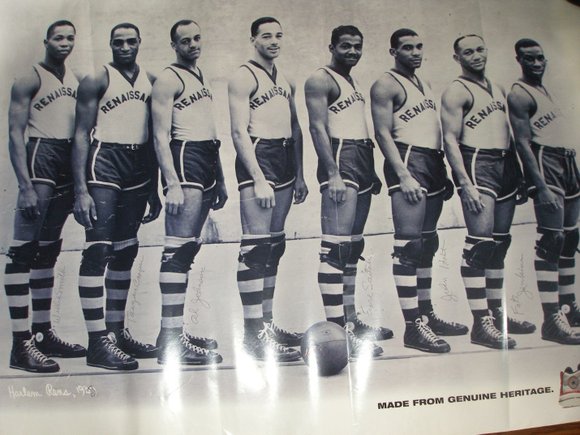 With the NBA playoffs looming and the current hoopla surrounding the NCAA’s March Madness, the New York Historical Society was prescient to mount an exhibition about amateur and professional basketball teams that competed in and around the city and country from 1904 to 1950.

At the center of the exhibit “Black Fives” is the legendary New York Renaissance, or the Rens, whose home court was the now long-abandoned Renaissance Ballroom that nearly abuts Abyssinian Baptist Church.

The exhibit, which is the result of the tireless and diligent research of Claude Johnson, will stand until July 20, and a recent article in The New York Times divulged much of the work that went into preparing and presenting it.

Find out more: Two of the books cited above by the late Arthur Ashe and Nelson George are good sources with which to begin. The articles by sports writers such as Bill Rhoden and Chris Broussard of The New York Times provide additional insight on the players and the history of Blacks in basketball.

Discussion: The exhibit at the New-York Historical Society is also a good place to continue your understanding of the history of Blacks in basketball, and those unable to attend in person can gather a glimmer of the exhibit online. Why Blacks were excluded from the sport is an interesting topic to examine the extent of racism in America.

Place in context: What events do you feel played a role in the integration of sports in the 1950s? Certainly, the Civil Rights Movement is the key to comprehending this significant era of change.

What was missing from the article was more about the Rens, who predated the founding of the NBA that excluded Black players until the arrival of Nat “Sweetwater” Clifton, Chuck Cooper and Earl Lloyd in 1950. I first read about the Rens in Arthur Ashe’s second volume of “A Hard Road to Glory.” A longer discussion of the team occurs in Nelson George’s “Elevating the Game: Black Men and Basketball.” And then I had an opportunity to interview Langley Waller and John Isaacs to gather their personal perspectives on the game and the men they played with and against.

Waller was never a member of the Rens, but he played against them back in the 1930s, days he recalled after establishing his lithography company in the basement of the Amsterdam News and printing posters for the great boxer Sugar Ray Robinson and others. Isaacs was a member of the Rens, and he shared with me his memories of performing with the team, particularly their championship years in the late 1930s. Both Waller and Isaacs are with the ancestors now, but their reflections of the Rens have been vividly captured by George and Chris Broussard.

As Isaacs told me and the Broussards, the Rens (founded in the early 1920s) won 88 straight games in 1933, even defeating the Original Celtics. Their contests, played in countless venues across the country, were forerunners to the hilarious and often staged games between the Harlem Globetrotters and the Washington Nationals. “But there was nothing staged about our games,” Isaacs told me. “They were hard-fought games, and we often got the best of them.” Isaacs often cringed at the mention that the New York Knicks were the city’s first national champion.

“Those players weren’t born when we won it,” he declared.

The mastermind of the Rens was Bob Douglas, who arrived in New York City in 1901 from St. Kitts in the Caribbean. An avid sportsman and a fairly competent swimmer, Douglas was working as a doorman when he came up with the idea of using the Renaissance Ballroom on Sunday evenings for basketball games.

“Under the direction of Douglas and coach-road manager Eric Illidge, the Rens won an amazing 2,318 and lost 381 contests in their history by utilizing a very team-oriented approach,” George Broussard wrote in his book. Equal to the team’s discipline on the court was the owner and coach’s command off the court. The team wasn’t allowed to take the court until a full account was made of ticket sales and the money was in hand.

Douglas often bragged that the Rens were the best basketball team in the world, and he proved it in 1939 when they defeated the all-white Oshkosh (Wisconsin) All-Stars, 34 to 25. “The title game was memorable for its fierce contact,” George Broussard wrote. “Both [Charles “Tarzan”] Cooper and [Willie] Smith fouled out, and [Pop] Gates’ uncanny two-hand set shots. Joe E. Williams, writing in the New York Evening Telegram, said, ‘They are the champions of professional basketball in the whole world. It is time we dropped the ‘colored’ champions’ title.’”

Nothing animated Isaacs more than retelling this thrilling victory. He often regaled his young charges at the Madison Square Boys and Girls Club, where he worked for many years in the Bronx before his death in 2004. Reporters were often treated to his stories and with gifts of a blow-up of the 1939 Rens posing in a Converse sneaker ad. The photo included here is of the 1938 Rens, which, according to Isaacs, is mistakenly identified as the 1939 team, though several of the players are the same. The star of that championship team, Gates, is not among the players here, who are from left to right: Willie Smith, Chuck “Tarzan” Cooper, Al Johnson, John Isaacs, Eyre Saitch, John Holt, Fats Jenkins and Lew Badger.

A decade or so after the championship, the Rens entered their final season, George Broussard reported. “Things had gone badly for the Rens since winning the title in 1939,” he wrote. “The ABL’s [American Basketball League] presence and World War II hurt the Rens’ business and forced Douglas to discontinue the team for a time. During those years, many Rens either joined the Trotters or local operations like the Washington Bears.”

After the war, Douglas petitioned to enter the ABL, but the preconditions for doing so were too difficult to overcome, plus most of his star players were no longer in their 20s or at the top of their game. Even more problematic, the team could no longer host their home games in New York City because of a restriction imposed by the Knicks. They played in Dayton under the name of the Dayton Rens, but that came to an end in 1949.

“If Douglas’ Dayton Rens had held on for one more season, they, too, would have received a free ticket into the NBA [like several other franchises],” George Broussard concluded. “The presence in 1949 of a Black-owned team in the first real national basketball professional league would have clearly altered the sport’s history and, more important, the course of race relations in America.” Of course, the same could be said for baseball, if the owners, managers and coaches could have accompanied Jackie Robinson to the major leagues on that fateful day in 1957.