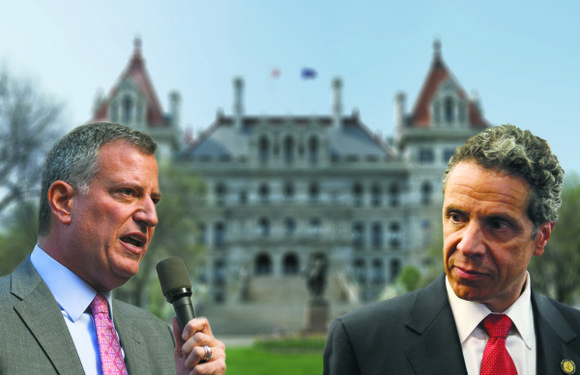 An African proverb concludes that when two elephants fight, only the grass suffers.

In this case, the city’s increasing number of homeless people is the grass as Gov. Andrew Cuomo and Mayor Bill de Blasio enter another round of arm wrestling and tug-of-war over policy and what’s to be done about homelessness.

As we have proposed in previous editorials on the financing of pre-K, the minimum wage hike, education reform and the charter schools imbroglio, the two leaders must find some common ground, some way to get on the same page lest the huge population of homeless citizens remain flotsam in a wave of bureaucratic contentiousness.

We were reminded of the grave situation facing the homeless in a recent report by the Coalition for the Homeless that stated the number of homeless people was nearly 54,000. The report praised the mayor and his emphasis on providing more affordable housing and a promise to reinstate a rent subsidy program to keep some families from having to seek refuge in shelters.

It is the latter issue that is at the center of the latest showdown between the governor and mayor, each wagging the finger at the other that there is no provision in the current budget for the homeless.

“The budget train has left the station,” Cuomo told the de Blasio administration on the rent subsidy issue, and saiying that they will have to wait until next year.

Another year is practically the length of time the average homeless family stays in a shelter, and there should be at least another “train station” in which the two sides can revisit this pressing matter.

Ideally, the permanent affordable housing proposed by the mayor is admirable, but that’s the long term; it’s the short-term remedy that is needed now.

One temporary remedy would help if the governor would support a minor legislative change that blocks the city from using state funds for a rent subsidy program to prevent homelessness. Such a move would cost the state nothing, but even that stopgap measure faces an April 1 deadline.

It’s too bad we have to endure another contest between the two leaders, and whoever is to blame is of little consequence to the homeless, who are once more at the mercy of dueling outlooks.

The grass continues to suffer.