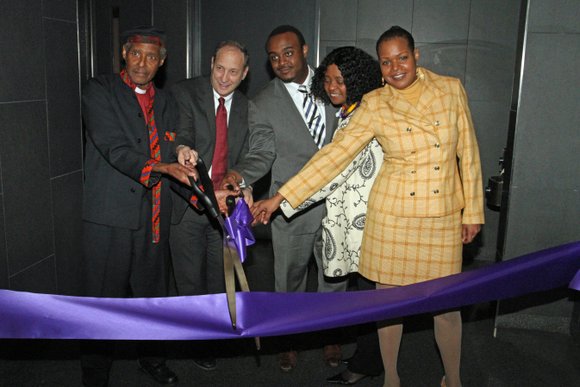 The Downtown Brooklyn Neighborhood Alliance (DBNA) Meditation Room inside Brooklyn’s Barclays Center has officially opened after recent renovations. The room, created in conjunction with the Atlantic Yards Community Benefits Agreement (CBA) of 2005, was one of the many provisions allotted for community residents upon the completion of the Barclays Center.

The room was revealed at an invitation-only dedication ceremony on March 11 that was hosted by the Rev. Dr. Herbert Daughtry, the founding chair of the DBNA, and featured remarks by Atlantic Yards developer Bruce Ratner, who is also the executive chairman of Forest City Ratner Companies.

“We’re very excited about it,” said Daughtry. “This is the first meditation room in the country in [an] arena, and [we’re glad] to see it realized.”

Daughtry, the former pastor of the House of the Lord Church, which is located a few blocks away, described how he came up with the idea and what the room means to him and his organization.

“What we wanted to do … is, amidst all of this stone and steel and stuff, to emphasize values,” he stressed. “Unless these buildings, these constructions [like the Barclays Center] are built upon values, prioritizing values, quality of life, they’re on a shaky foundation.”

The room, which is about 150 square feet in size, is located near the health services area at the Barclays Center and boasts bright lavender walls with inspirational words on them: love, faith, joy, forgive, rejoice, peace.

Ratner reiterated the necessity of values and how his company understood this.

“In some sense, this is a small thing … but in a lot of ways, it’s probably the most important ... because among this business and craziness, you do need some time to come and just [breathe] and see words like love, rejoice, forgive.”

Ratner himself made use of the room just before the ceremony took place. He told the audience how earlier that day, he received some troubling news and was taken into the room upon his arrival by Daughtry and his wife, Karen, in order to breathe and reflect.

The CBA agreement, which designated space for the room, states as follows: “Upon completion of the project, located inside the arena will be a meditation room to be used by the community and patrons.”

As a result, both Daughtry and Ratner emphasized the room’s availability to everyone, regardless of their faith.

“When you go inside the meditation room, you see the beauty of it, the quiet of it, the spirituality,” said Daughtry. “It’s open to everybody, [anyone who] needs a place of quiet rest, a place of reflection.

“We wanted to send a message across the world and to America in particular that in spite of the advancements in science, technology … in spite of the high rises, unless there are values—decency and fairness and love and peace … and health among the citizenry—then everything else we do will amount to little or nothing,” he said.

Daughtry and his wife both stressed that this is only the first phase in their work with the CBA to build upon community relations and improve the local Brooklyn community surrounding the Barclays Center.

“When we came to negotiate in 2004, some of the hard stuff, as I call it, was already taken—the housing, construction, business jobs, job training—all of these were already claimed by other members in the community, so we were confronted with [the question of] what can we come up with that will benefit the community,” he said. “We came up with the health center.”

Karen Daughtry went on to discuss the next phases of the project, which will include a state-of-the-art health facility, in addition to an intergenerational complex for Brooklyn seniors and a separate one for the youths.